Zuma’s May Day of shame 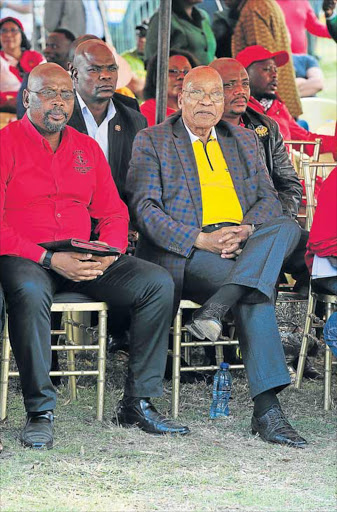 NOT WELCOME: Cosatu president S’dumo Dlamini and President Jacob Zuma at the Cosatu May Day rally in Bloemfontein in the Free State. TOP RIGHT: Police on duty at the rally Pictures: VELI NHLAPO
Workers stood their ground yesterday and refused to be addressed by President Jacob Zuma at the main Workers’ Day rally organised by Cosatu in Bloemfontein.

Cosatu leaders cut the rally short, ending it without Zuma or any union leaders delivering speeches.

A scuffle broke out between the anti- and pro-Zuma groups shortly after the president arrived‚ and some punches were thrown.

Workers only allowed deputy president Cyril Ramaphosa, secretary-general Gwede Mantashe and treasury-general Zweli Mkhize to speak where they had been deployed around the country.

Ramaphosa told a rally in Mpumalanga: “We are calling for unity in the alliance. When we look at the situation in the country now it’s not right and the ANC has problems so unity is what we need.”

Zuma’s rejection by workers was a first after workers helped him ascend to power in 2007 as ANC president and then as head of state in 2009.

Things soured following many scandals, among them the recent cabinet reshuffle and reports of the Gupta family capturing the state to enrich themselves.

They held aloft placards reading: “Cosatu is dividing us. JZ cannot lead the country. But today they invite him to address. Who is fooling who?”

Zuma supporters in ANC regalia and red T-shirts inscribed with “100% behind Zuma” carried placards reading: “Zuma is us. We are Zuma”.

The chaos led to Cosatu provincial secretary Monyatso Mahlatsi announcing the cancellation of speeches of Zuma, Nzimande and Dlamini, something that has never happened before.

Known Zuma supporter Free State premier Ace Magashule said: “It is an embarrassment to all of us. Instead of celebrating Workers’ Day, this is what we are doing.”

Nzimande called the display at the rally a wake-up call and Dlamini said the Cosatu leadership would have to meet and discuss what had happened.

There was also drama at the May Day celebrations at the old Peter Mokaba stadium in Polokwane, Limpopo, yesterday when people broke out into a song calling for Zuma’s removal.

This was shortly after they had prevented ANC deputy secretary-general Duarte Jessie Duarte from speaking.

Duarte was one of the top six ANC leaders pencilled in to address Workers’ Day celebrations nationally.

When the chairman for the Limpopo ANC Stan Mathabatha made it clear that Duarte would be speaking people started booing.

Mathabatha pleaded with the crowd: “Comrades give the DSG a chance!”

But the crowd started singing for Zuma to be removed and continued booing.

After her rejection, Duarte told the media her rejection was part of a widespread campaign to fuel divisions.

She said: “To try and divide the ANC from the workers of this country will not succeed. And whoever is doing this must understand that the ANC is not just going to sit back and allow that to happen.”

Duarte said the party had a good relationship with workers.

“This is just a shameful display of populism.”

SACP national chairman Senzeni Zokwana, who spoke after Duarte had been kept off the podium, tried to stress the importance of unity in the ANC and the alliance, but was interrupted by people shouting the name of ANC deputy president Cyril Ramaphosa. Some in the crowd were holding placards written “Cyril for President”.

In Mpumalanga, Cosatu first deputy president James Tyotyo said President Zuma scored own goals every day and therefore his deputy, Cyril Ramaphosa, was the only hope to succeed him.

Tyotyo was addressing a May Day rally at Umbhaba Estate near Komatipoort where over 350 workers were fired in 2015 for demanding to belong to a union.

Ramaphosa was with him on the podium.

Tyotyo said Ramaphosa would not steal government money nor use it to build a home for himself.

“We cannot be biting our tongues as Cosatu. Here is the ANC deputy president. We are saying they must elect him.

“We are not saying this because he has paid us, but because he is a good leader,” he said.

He told Ramaphosa the position of the federation’s central executive committee was that Zuma should resign. — Tiso Black Star Group