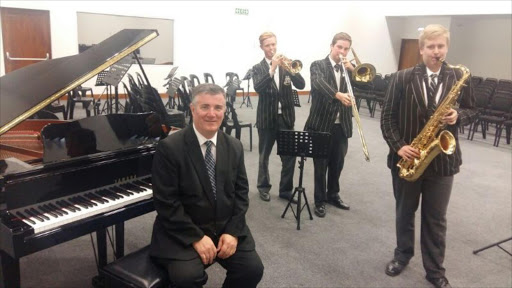 The music centre, which will open officially tomorrow evening, is the embodiment of a long-held dream for the school’s musical director, William Paxton, who has taught music there for 27 years.

Paxton gave the Daily Dispatch a sneak peek at the modern facility, which boasts a 185-seat auditorium with acoustic ceiling panels and enough space for the school’s chamber choir and 40-member concert band to perform. In the interests of great sound and reverb, even the curtains and carpets have been treated to best absorb sound.

Situated behind the hall, the building is in keeping with the architecture of the school and overlooks the rugby field that had to shift its goalposts to make room for the double-storey cultural facility.

Paxton said he and other music teachers had moved into the first phase of the building a year ago and were enjoying teaching in spacious rooms equipped with projectors as well as two bright new classrooms for music and drama classes.

The newly completed auditorium first rang with music during the recent Port Rex Lions Eisteddfod, which used it as a venue, when the Selborne College Concert Band bagged the Doris Price-Harper Award for the best high school band.

“We were used to teaching in poky rooms separated by dry walls and the band practised in a classroom. We still produced the goods, but now it will be so much easier, especially with more boys taking part in our music programme.”

Paxton said when he first joined the school the band consisted of just 15 musicians, with 12 boys taking music as a subject. “Now we have 40 in the band and 80 boys are doing some form of music including marimba, choir, solo singing and individual instruments. I would like to grow the band to 70 members because we have the space,” he said.

Matric musicians like trombonist Hugo Smit sang the praises of the new centre.

“It’s a vibrant place to practise without disturbance,” he said.