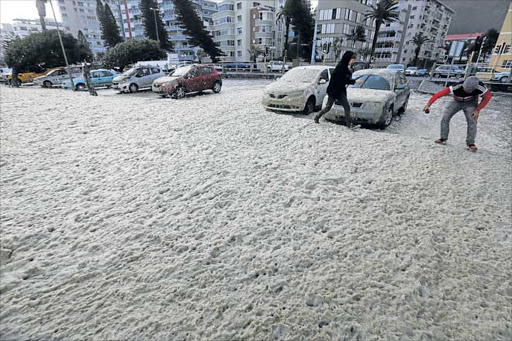 MARKED: The Sea Point promenade in Cape Town is sprayed with foam during the Cape storm Picture: ESA ALEXANDER
By MIKE LOEWE and REUTERS

Eight people have been killed and hundreds forced from their homes as Cape Town and surrounding areas are lashed by the worst winter storm in 30 years.

The storm is expected to dump more than 50mm of rain in some areas and trigger waves of up to 12 metres, the South African Weather Service said in warnings.

The people in shanty towns – who have just recently been trying to cope with the region’s worst drought in a century – have been hardest hit, with wind and floods of heavy rain washing away their homes built of planks and zinc sheets.

He said in one incident a family of four died in a fire caused by lightning, while another person died due to a building collapse.

Isolated showers are expected along the coast between Plettenberg bay and Port Alfred, but that is where the rain stops.

No rain is expected for the eastern half of the province.

A light snowfall is possible over the southern Drakensberg in the north of the Eastern Cape, said Sampson.

Tomorrow it will clear gradually from the west.