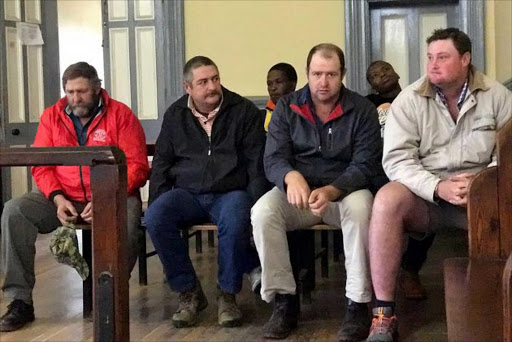 IN THE DOCK: Robert, Steven and Jonathan Armstrong and Dane Smith appeared in the Komga Magistrate’s Court yesterday Picture: ZWANGA MUKHUTHU
A drone helped track down four men after they allegedly shot two wild animals on a government farm in the Kei River area at the weekend.

Kei wildlife has been plundered by poachers in recent months and environmental compliance and enforcement officials have had to rely on unmanned aerial vehicles to stop illegal hunting.

They were arrested on a government farm 40km south-west of Komga when they were spotted using a drone.

A joint operation between police and members of the Green Scorpions was led by Rob Stegmann, a deputy director of compliance and enforcement in the provincial department of economic development, environmental affairs and tourism (Dedeat).

Stegmann said they were patrolling the area as part of concerted efforts to “eradicate plundering of wildlife” when they heard dogs barking followed by multiple gunshots.

“We then entered the property and made contact with the hunters with the help of the drone.”

He said they asked the hunters to accompany them the police station, where they were released and warned to appear in the Komga Magistrate’s Court.

They are to face two charges – one of illegal hunting and another of possession of unlicensed firearms and ammunition.

The men appeared in court yesterday before magistrate Michelle Pillay.

“It is alleged that on the day of the commission of the offence, members of ... acted on information that the accused before court were hunting on the said farm without a permit to hunt,” state prosecutor Wesley Peter-George told the court.

Pillay advised the four that their options were to appoint their own lawyer, to be assigned a legal aid lawyer or to conduct their own defence.

The case was postponed to July 10 for further investigation to take place and the men were released on warning. They were not asked to plead.

lThe Eastern Cape director of the Green Scorpions, Div de Villiers, said illegal hunting and plundering of plants on state farms throughout the Eastern Cape was a “huge problem”.

“We have had a number of successes in past weeks,” he added.