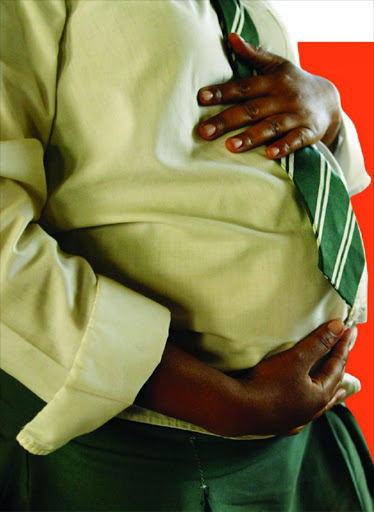 Pupils in Eastern Cape schools are falling pregnant by the score – with some of them as young as 12 and 13 years.

The Eastern Cape legislature in Bhisho was told recently that 254 pupils fell pregnant in the 2016 academic year, a revelation that has left the legislature “shocked and embarrassed”.

Eight of those who fell pregnant last year were minors still in primary schools, the provincial education department revealed.

However, department spokesman Loyiso Pulumani yesterday said 209 of them were from secondary schools, 36 from combined schools, eight From primary schools, and one of them attends a school for learners with special needs.

In her written questions to the department, Cowley also asks Kojana to explain how they “protect the emotional, physical, mental and academic wellbeing of such affected pupils”.

Cowley also asked the department about programmes they have in a bid to educate these pupils about the dangers and obstacles that these early pregnancies result in.

Responding, Kojana said the care and support for teaching and learning “is a vehicle used by the department to deal with the learners affected by these early pregnancies”.

Kojana said through this care and support programme his department had been able to hold learner camps where pupils were taken through activities on making right choices and instilling sex education approaches.

“The emotional, physical, mental and academic wellbeing of these learners have been protected by, among other things, the establishment of a support structure comprising 825 unemployed youths working as learner support agents in 825 schools which have challenges such as learner pregnancies,” Kojana said.

He said this was done through a memorandum of understanding with the department of social development.

However, Cowley said: “I just don’t believe that all the pregnancies were reported because in some instances, once these girls realise they are pregnant and in early stages, they just fall out of the system without revealing the reasons.”

The legislature’s education portfolio committee chairman and ANC MPL Fundile Gade yesterday said even though the numbers were quite alarming, and what shocked and embarrassed his committee the most, was the fact that some of these children were as young as 12 years.

Gade said his committee has been informed that most of these cases were in the OR Tambo district and Nelson Mandela Bay Metro.

He said there had been no reported cases of teachers being involved in impregnating these young girls.

“However, we cannot rule that out when we look at how some teachers behave.”

“This needs a collaborative effort from all social cluster departments because the reality is that these children, most of whom stay in shacks, are victims of child-headed households and unemployment in their families,” he said.

Two years ago, the Dispatch reported that between 2010 and 2014, 28322 teenage pregnancies were reported in Eastern Cape schools.

At the time it was reported that 10 primary schools in the province had reported a total of 232 cases, while Sophathisana Senior Secondary School in Reeston, East London, had at the time, recorded the highest rate in the country with 74 pregnancies. — asandan@dispatch.co.za