ANC warns delegates not to speak to media 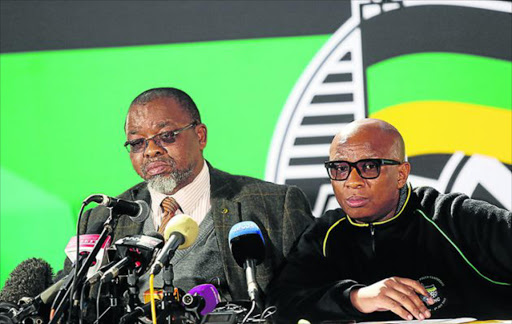 ATTENTIVE: ANC secretary-general Gwede Mantashe and national spokesperson Zizi Kodwa listens to a question during a media briefing about the readiness of the six day ANC national policy conference taking place at Nasrec Picture: MASI LOSI
The ANC is clamping down on leaks at its national policy conference‚ warning members and leaders alike of dire consequences if they discuss any of the deliberations at the meeting with the media.

A copy of the rules for the event‚ seen by the Daily Dispatch‚ bars delegates from speaking to the media‚ leaking information from commissions or sharing documents.

The conference‚ starting at 9am today‚ includes an array of closed sessions where delegates will debate policy amendments.

Journalists are only allowed to attend the opening and closing sessions of the conference and will be briefed on the conclusion of the discussions.

“Certain documents distributed at conference may be confidential and delegates are not allowed to distribute such documents to persons who are not entitled to them‚” state the rules.

It states that only ANC national spokesperson Zizi Kodwa or someone he authorises to speak on behalf of the party can talk to the media.

“Comrades may not post on social media any information emanating from closed sessions and are expected to carefully consider the content and potential risks of posting, sharing‚ or resending any information from open sessions‚” the rules state.

The party has also warned its members against posting insulting and derogatory statements on social media which may bring “harm to the ANC and any of its members”.

The ANC meets amid heightened divisions and factionalism that arises as a result of a vicious leadership contest in the run-up to its December elective conference.

ANC secretary-general Gwede Mantashe is scheduled to deliver a diagnostic report on the problems facing the party which delegates would then have a chance to debate. — Tiso Black Star Group