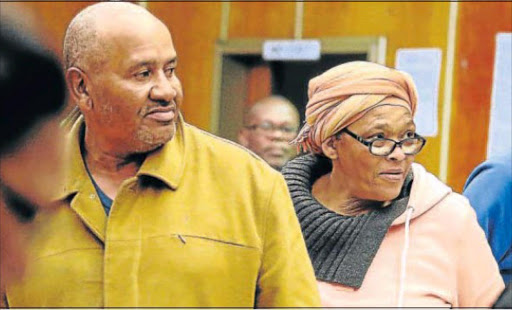 family
Alleged drug kingpin Livingstone Napoleon, 60, has been re-arrested alongside his wife, Ingrid Napoleon, 59, and their son Gladwin Napoleon, two years after they were caught with R4.3million in cash.

The millions of rands in packets of R10000, along with two money-counting machines and drugs, were found at the various homes of Napoleon family members during covert police operations dubbed “Operation Bolt” in July 2015.

When confronted with some R1.4-million found scattered across a couch in her East London home, Ingrid claimed it was the proceeds of chicken sales.

The money and family assets were frozen in 2015 after a preservation order brought by the national director of public prosecutions (NDPP).

The criminal case of drug dealing was provisionally withdrawn from the East London Magistrate’s Court for toxicology reports which have since come back.

The Napoleons handed themselves over last Wednesday and subsequently appeared in the East London Magistrate’s Court where they were released on a warning.

Advocate Nceba Ntelwa appeared on behalf of the state. The case was postponed to August 24.

The accused’s re-arrest follows a judgment by the Grahamstown High Court last Monday ordering that the forfeiture application by the NDPP proceed with original affidavits.

The state is seeking a forfeiture order for the millions of rands in terms of the Prevention of Organised Crime Act arguing the cash and other assets seized are instruments or proceeds of the crime of dealing in drugs. The defence is opposing the application.

The parties flocked to the Grahamstown High Court in May this year seeking relief against each other in the forfeiture application.

The state wanted the high court to strike out portions of the defence’s answering affidavit on the basis that the information contained in their affidavit was taken from classified SAPS documents which they had obtained illegally.

The defence told acting Judge Nicola Redpath-Molony the documents came into their possession as part of further particulars furnished by the state to Van der Merwe in a separate matter. The state claimed the documents were “erroneously included in a brief”.

Redpath-Molony found the documents were already in front of the court in the forfeiture application.

The judge dismissed both the state and defence’s application with costs. — zwangam@dispatch.co.za