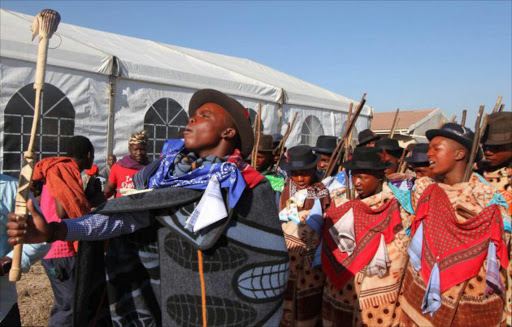 This show of unity was evident during a three-day traditional initiation homecoming ceremony or umgidi held for Bhisho legislature senior manager Thembekile Xaba Mzantsi’s sons Akohlulwa Mzantsi, 18, and Siviwe Mzantsi, 25. The event was held in Ziphunzana village in Mthatha over the weekend.

It marked the first time that the AmaHlubi monarch, King Mzuwenkosi Radebe, better known as King Langalibalele II, had travelled from his Mntshezi Great Place in Estcourt in KwaZulu-Natal to attend an umgidi in the Eastern Cape.

Langalibalele II also used the platform to revive long-existing ties and relations between AmaHlubi and AmaMpondo.

Some AmaHlubi clans have been living in Western Mpondoland for more than 100 years since the outbreak of the Mfecane Wars, and are the loyal subjects of Western Mpondoland King Ndamase Ndamase, whose forefathers provided refuge and asylum to these clans.

King Langalibalele II and Burns-Ncamashe called for the youth to empower themselves with education, saying future leaders had to show a high level of respect. “These days education is key to everything,” said King Langalibalele 11.

King Langalibalele II and Burns-Ncamashe said that being a man came with responsibilities like becoming educated, respecting elders, fearing God, respecting the ancestors and upholding good morals and values.

The king and Mzantsi expressed concern about the high number of initiation deaths.

“There is nothing wrong with the custom, but some people practise it wrongly. AmaHlubi had not experienced initiation deaths. We need to work together collectively as nations and tribes and assist each other in fighting the rot. Those tribes who are ravaged by deaths of initiates must come to those with best practices like AmaHlubi,’’ said King Langalibalele II.

He said the presence at the umgidi of kings of AmaHlubi, AmaMpondo, and AmaXhosa showed the beauty of unity in cultural diversity and was a celebration of Africanism.

The Qoboshiyane umgidi was attended by the who’s who in politics, entertainment, business, and traditional leadership. — lulamf@dispatch.co.za