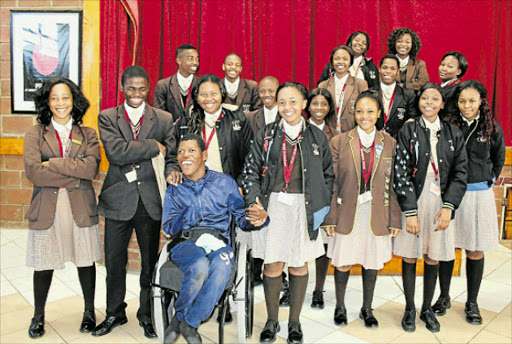 THRILLED: 21- year-old Bajongile Luvalo, who suffers from cerebral palsy, with pupils from Holy Cross Education Centre in Mthatha this week, after they gave him a wheelchair Picture: SIKHO NTSHOBANE
In all his 21 years, Bajongile Luvalo has never spent a day in a classroom.He suffers from cerebral palsy and cannot talk, and as a result his mother was unable to send him to school.

But the KwaBhaca-born lad found himself mobbed by excited pupils when he visited Holy Cross Education Centre (HCEC) in Mthatha earlier this week.

Touched by Luvalo’s situation, the pupils clubbed together and raised R8000 to buy him a custom-made wheelchair, which was handed over to him and his mother on Wednesday.

The wheelchair cost around R16000 and the designer, Shonaquip, from Cape Town, found a sponsor to pay the rest of the money.

Some of the pupils shed tears and wrestled each other trying to hug him while a smile was permanently etched on his face as he lapped up all the attention.

Speaking on behalf of the pupils, Grade 12 pupil Esihle Mbiyo said they were saddened to hear of Luvalo’s plight, adding that doing charity work in communities was the norm at the school.

“It is not nice to learn that there are people who might be having difficulties in life. That is why we decided that we needed to do something to make his life a lot easier.”

Luvalo’s proud mother, Constance Luvalo, could also not hide her tears, saying the love showed to her disabled son was overwhelming.

“All I can say is that I am very excited and I am sure he also is, judging by how happy he seems to be and the fact that he is playing with everyone.”

The school has reportedly been working with the Association of and for People with Disability for several years. The association, after learning about Luvalo, contacted HCEC last year and the pupils jumped at the chance to help.

In 2014, they managed to buy 18 white canes for people with blindness and also arrange mobility training for them.

A year later, they donated around 25 packets of pampers to children with cerebral palsy.

Speaking at the hand-over of Luvalo’s wheelchair, the association’s co-ordinator in the OR Tambo district, Xoliswa Ntengo, praised the pupils for their generosity.

Holy Cross principal, Susan Jacob, said they always tried to inculcate a culture of giving to their pupils as they believed it would make them better people in their adult lives. — sikhon@dispatch.co.za