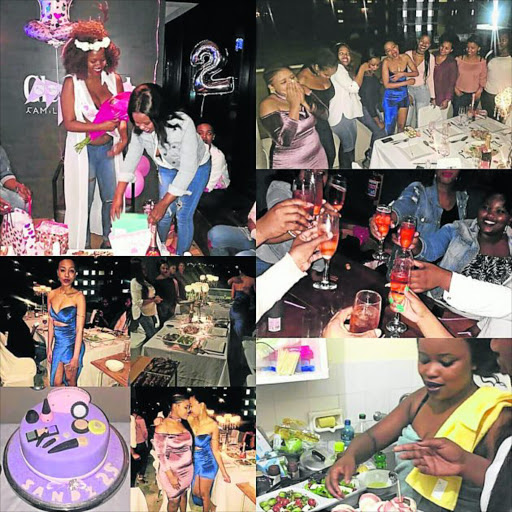 When her lavish parties grew wilder and more frequent, and some were not invited, political opponents at Walter Sisulu University let the R14.1-million cat out of the bag.

Mani is a second-year accountancy student at the Potsdam campus and a branch secretary of Pasma, the student wing of the PAC.

By the time she was bust, she had transformed herself and her immediate friends into glamorous international-styled women, sporting expensive weaves, carrying iPhone7 cellphones, slugging back shots of R700-a-bottle whisky and emulating music star celebs, especially their icon Beyonce.

Dispatch has learned that rivals in Sasco grew suspicious after Mani’s Cinderella-like transformation.

The Dispatch was told: “She used to sport neat corn rows and sometimes pushed back her hair – but she has recently started wearing a R3000 Peruvian weave.

“She also bought an iPhone 7 for herself and each of all her friends. She suddenly appeared at lectures wearing designer clothes and she pimped up her crew of friends.

“They started looking like a musical band and she started adopting Beyonce’s style.”

“She also threw surprise birthday parties for her friends and showered them with expensive gifts. She used some of the money to fly to events like the Durban July and managed to buy front-row seats for televised events.”

Suspicions grew after a Spar receipt was leaked showing a balance of just over R13.6-million in her NSFAS food allowance account.

“As a responsible leader I called NSFAS offices to check if this was true and NSFAS confirmed that the initial amount was R14-million.

“Obviously after the slip was trending on social networks students started connecting the dots on how she had been living a luxurious life in the past few months, from the birthday party of her cousin-sister to her friend’s baby shower that was at a champagne bar.

Another Sasco source said Pasma hosting the “coolest” and most “extravagant” parties, where expensive alcohol was quaffed, led them to uncover the truth.

“They are not in power and we are the ruling student movement, so we didn’t understand how come they held such extravagant parties.”

The source said the cheapest bottles served at the parties were Johnnie Walker Gold which costs R700 for a 750ml bottle.

Sasco branch chairman Zolile Zamisa said: “We are shocked about this incident. Not so long ago we were protesting for thousands of students who were left without funding due to shortage of funds.

“She was living a lavish lifestyle hosting birthday parties for each of her friends at upmarket champagne clubs and other expensive hangout spots.”

Mani had also flown around SA.

Zamisa said: “We are very disappointed at her as a student leader for not reporting the mistake.”

NSFAS food allowance money is not cash, but is loaded onto a student card as a voucher.

The Dispatch was told some students manage to exchange the voucher for cash in deals with certain shops.

WSU spokeswoman Yonela Tukwayo said specific merchants had allowed students to use the vouchers to buy books and food. The university would investigate how the student was able to buy lavish goods.

Michael Ansell‚ CEO of Intellimali, the company which administers NSFAS payments to WSU students, said they paid her in error, and would investigating her for fraud.

“Legal action will be taken against the student.”

Mani said that it was “very clear” she didn’t make the error, “so call WSU and NSFAS”.

Although she agreed to meet with the Dispatch, she did not, and her flatmates at her residence said she had gone to ground since the story broke.

However, there has been a flood of Facebook images posted by envious colleagues, some of them screen grabs, or collages from Mani’s Facebook posts, which show her holding air tickets, toasting at parties, with gorgeous big cakes or wearing luxury clothes.

This was accompanied by a slew of angry comments accusing her of being selfish.

Students said the money she blew could have supported 1200 students for a year. In May disgruntled students from WSU protested when 3000 students were left without funding due to shortages of funding.

“There are rules to how the money should be used and when students use funds for anything besides books, the account is suspended.”

Tukwayo said WSU would require that Mani repay the money.

NSFAS spokesman Sipho Matomela said the scheme would investigate the incident and respond.

WSU has 30500 registered students, of whom 18144 are funded by NSFAS. — Additional reporting by Sino Majangaza, Sisipho Zamxaka and TimesLIVE