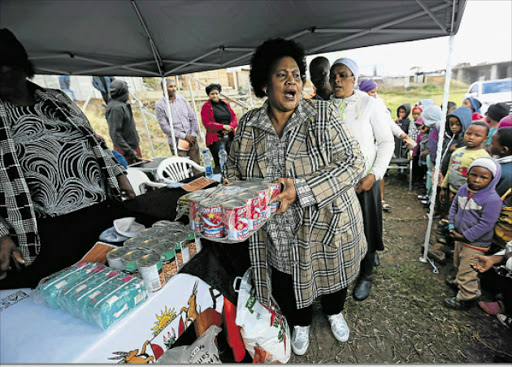 KIND GESTURE: MEC for roads and public works Thandiswa Marawu, hands over food parcels for hungry and needy children in Beacon Bay's Nompumelelo Township. Picture: MARK ANDREWS
About 200 children from Nompumelelo Township received R7000 worth of groceries from various donors, thanks to an initiative started by roads and public works MEC Thandiswa Marawu.

Marawu started the project at her church which is situated in the heart of the township, when she discovered that a few children attending Sunday school were singing in the choir on empty stomachs.

“There were only 17 children when I started taking R3000 from my salary every month to buy groceries to feed the young children, who sometimes looked hungry and malnourished.

“Living in the suburb of Beacon Bay and being the person I am, I took it upon myself to serve God by making a difference in the lives of the little people, who came to church with the hope that something would give.

“After years of taking from my own pocket, officials from my office also adopted these children and, together, they roped in others who have now adopted the Nompumelelo feeding scheme project.”

Marawu said although she had often felt some strain, she remained committed to continue to inspire others to follow suit.

“Now that there are people who have committed to donate R1000 a month, while Spargs and others have requested a grocery list for them to contribute food to the same amount, the project has received sufficient support to keep it going on a monthly basis,” she said. Six employees from Marawu’s office have also committed to contributing R300 each to buy groceries for the project. Marawu said she would now be going into Mdantsane to start a project there.

Amathole Women’s Forum’s Nontembiso Masela said she was pleased to be part of the project. “It doesn’t hurt for us to take from what we have to improve the livelihood of the children within the community.”

The joint effort saw the scheme receive a total of R7000 in groceries. Project manager Linda Magwentshu said the donations were warmly received.