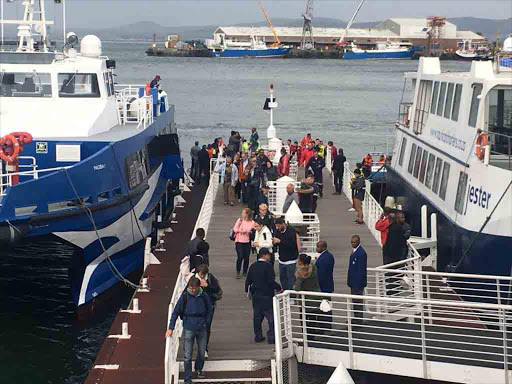 Caption for pic sent to Screw It: Rescued passengers disembark from Madiba 1 at the Nelson Mandela Gateway. Picture: Esa Alexander
An estimated 60 people were rescued from a Robben Island ferry after it got into trouble in rough seas off Cape Town on Friday afternoon.

The alarm was raised shortly after 2.30pm when the Thandi is believed to have been bringing tourists back to Cape Town from the island.

Madiba 1 transported the passengers to the Nelson Mandela Gateway at the V& A Waterfront. Three of them were carried ashore in stretchers‚ but there was no information on their injuries.

A crowd gathered at the Gateway — the terminal for tourist trips to Robben Island — included the anxious daughter of one of the passengers. But the crowd was forced to disperse by V& A security guards.

A staff member at Nonkululeko Charters‚ the owners of the Thandi‚ confirmed that there “is an emergency involving the boat’’. However‚ she could not provide details.

Jacques Ellis‚ the skipper of luxury charter yacht Only One‚ said he was sailing to the Thandi’s rescue. “But we will only know what’s going on once we’re there‚” he said.

Thandi is part of a fleet of six tourist boats owned by Esa Yacoob‚ which started with a small harbour cruise boat‚ Sea Shuttle 1‚ in 1994.

Yacoob did not answer his phone on Friday afternoon‚ but his website says: “The company employs over 40 people from skippers‚ deckhands‚ service providers‚ marketing and admin staff.

“Over a process of seven years‚ the fleet grew. Sea Shuttle 1 was renamed Tommy the Tugboat and is permanently of service outside the Two Oceans Aquarium‚ giving educational and entertaining harbour tours for young and old.

“Ameera‚ a 40ft catamaran (37 passengers)‚ is the ‘green ambassador’ of the fleet and the all-time favourite party boat‚ the Jolly Roger Pirate Boat (75 passengers) joined the fleet in 2008. In November 2012‚ Africa’s first cigarette boat‚ Adrenalin‚ was launched.

“Designed and built from scratch by Yacoob‚ Adrenalin is the company’s stealth bomber for those who are in the need for speed. Powering up to 70km/h (33 knots)‚ she will certainly get the endorphins flowing as she flies like a Harley-Davison across the Atlantic Ocean.

“The fleet is built to confirm to international safety standards and is operational 365 days of the year. The company has an excellent track record in the tourism industry as well as with the South African Maritime Safety Association for the last 18 years.

“The vessels have been used in many international Bollywood and Hollywood films and European ad campaigns. Individual vessels can be used for private charters‚ photographic and film locations. Offering a unique blend of boats to suit all tastes and need‚ authentic and unforgettable experiences are on offer off Cape Town’s unique and breath-taking coastline.”