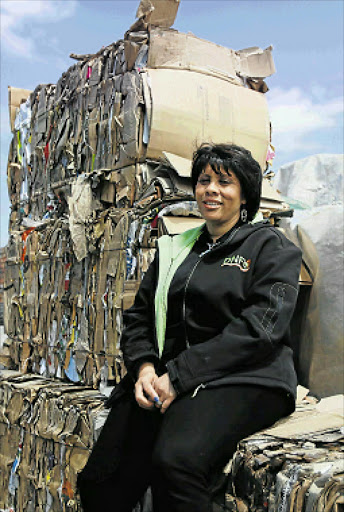 ENVIRONMENTAL SOLUTION: CEO Deidre Nxumalo-Freeman at NDF Waste and Environmental Services in East London. Picture: MICHAEL PINYANA
With the only two legal landfill sites around Buffalo City Metro declared full about two years ago, residents may be left with no choice but to recycle their rubbish.

This is the aim of East London company DNF Waste and Environmental Services, a recycling company which officially opened its doors nine years ago.

While initially targeting the general public with the aim to get people into the habit of recycling household goods which regularly make into the trash, CEO Deidre Nxumalo-Freeman said it was after she joined forces with BCM, the Development Agency and the Border-Kei Chamber of Business and started the Call-2-Action campaign last year, that she began targeting schools.

The Call-2-Action campaign involves businesses coming together with the aim of beautifying the metro in the hopes of increasing tourism.

Nxumalo-Freeman said 32 schools were currently taking part in the initiative.

The schools recycle everything from paper, milk and juice cartons, soft drink bottles and mayonnaise jars to margarine containers, CD cases and cutlery.

DNF currently operates from two depots – one situated in Wilsonia, and the another in North End, the latter of which also serves as a buy-back centre where vendors are paid for their recyclable goods.

“In total, we are currently working with 15 schools based in Mdantsane where we have partnered with Coca-Cola, and the rest are all schools based in and around the city,” Nxumalo-Freeman said.

“What happens at the schools is that BCM have got these wheelie-bins with stickers on them and each school gets nine of them.

“These bins look like the ones handed out to households, except these are smaller in size and they are different colours. One bin is for putting in cardboard, one is for paper, one is for plastic and so on and so forth.

“We have a competition with a glass recycling company running as well so some of the schools have the big green bottle banks,” Nxumalo-Freeman said.

Besides the positive impact on the environment, Nxumalo-Freeman said many people were not aware that there was money to be made from recycling.

In September alone, DNF’s buy-back centre processed more than 15126kg of waste and paid out just over R13614 for recyclable goods.

“The recyclables that we collect from the schools have a monetary value attached to them. It’s like if we collect cardboard from anybody, we pay 70c/kg.

“But instead of paying the schools immediately, we accumulate the credits to the end of the year and then depending on how much they collected – say if they collected R5000 for the year – they can then choose something to the value of that money and we purchase it for them and hand it over.

“That way they can choose something tangible.

“So if it’s a bench or a computer, whatever they want really, we ensure they get it,” she said, adding that some of the schools also served as drop-off points for the general public as well.

Nxumalo-Freeman urged everyone to start recycling.

“If you won’t think of your environment, then think about your pocket because this way you can make some money while still caring for the planet,” Nxumalo-Freeman said. — zisandan@dispatch.co.za