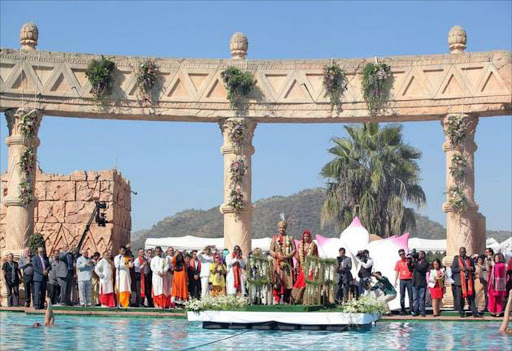 This file photo courtesy of the Gupta family released on May 3, 2013 shows Vela Gupta and her husband Indian-born Aaskash Jahajgarhia posing with relatives and guests during ceremonies for their wedding in Sun City, South Africa, on May 1, 2013. Image: AFP / COURTESY OF THE GUPTA FAMILY / Handout
The dismissal of three shop stewards who participated in an unprotected strike following the notorious Gupta wedding at Sun City in 2013 was substantively fair.

The Labour Court made this finding in relation to an unfair dismissal case brought by Sam Botlhale‚ Clifford Ramontle and Koki Khojane.

The three were among a group of employees from the South African Commercial‚ Catering and Allied Workers Union (Saccawu) who embarked on a strike on May 11 in 2013‚ despite a Labour Court interdict preventing them from doing so.

The workers went on strike as they believed Sun City had failed to deal with the alleged racist conduct at the Gupta wedding‚ which took place at the resort between April 30 and May 3.

On May 3 Saccawu held a meeting with Sun City management. During the meeting the Saccawu members made allegations of racism in respect of the Gupta family and their guests.

The union claimed the Gupta family only wanted white drivers and waitrons‚ and that a female employee of the spa concessionaire had been sexually harassed by a guest.

Sun City operations executive Sir Richard Hawkins testified in court that he asked had Saccawu to submit evidence to support its claims.

Hawkins said the spa employee had reported the incident to the concessionaire‚ who dealt with it. From Sun City’s side‚ the guest was removed from the premises.

Hawkins disputed that all drivers were white. He said he saw that the drivers employed by the Guptas were of mixed race.

He said all the staff members at the kitchen who were rostered to work did so‚ and that none of the employees missed a shift because of the Guptas.

Saccawu and its parent body‚ the Congress of South African Trade Unions (Cosatu)‚ did not submit the requested evidence.

Instead‚ Cosatu indicated on May 7 that it wanted to march to Sun City on May 11 to present a memorandum “to demand answers from Sun City over the Guptas wedding arrangement and racial treatment meted out to our members by both Sun City and their rich friends (Guptas).”

The South African Music Awards event was taking place on that day at the resort.

When Sun City failed to receive an undertaking from Cosatu that there would be no protests on May 11‚ it obtained an order from the Labour Court to prevent the strike action and picketing.

Despite the court order‚ Saccawu members picketed at Sun City on May 11.

The employees’ case is that‚ although the strike was unprotected‚ the employees did not deserve dismissal as the protest action was in response to unjustified conduct by Sun City.

“What became clear at trial is that the offensive conduct complained of was not perpetrated by the employer but that the issues that gave rise to the strike action arose from the conduct of a third party‚ the Guptas and their guests‚” Judge Connie Prinsloo said.

She said evidence before court showed that Sun City had addressed the union’s concerns‚ albeit not to the satisfaction of the union.

Prinsloo said the employees were shop stewards and knew the strike was unprotected and interdicted by an order of court.

She said an order issued by the court bound all persons to whom it applied.

She said if employees deliberately acted in contempt of such an order‚ they should not expect sympathy or mercy from the court.