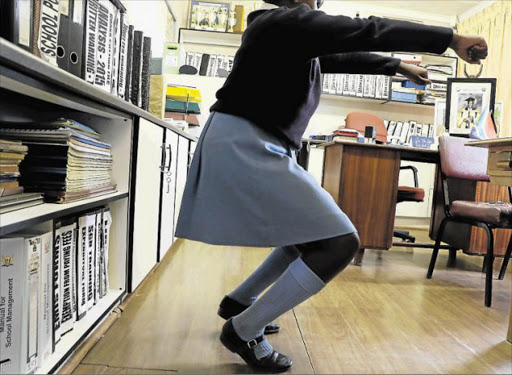 A OCTOBER 27, 2017 A Bhisho Primary School pupil demonstrates how the accused teacher punishes them with strenuous exercises Picture: SISIPHO ZAMXAKA
A school teacher’s unorthodox methods of discipline, have placed an 11-year-old Eastern Cape pupil in hospital.

Despite the teacher’s admission in a preliminary provincial education department investigation that she used these methods, described by her principal as “torture”, the teacher was still in class teaching yesterday.

The child spent four days in hospital were she was treated for severe muscular pain in the upper body after a teacher allegedly made her squat for several minutes, holding a heavy bag over her head as a form of punishment for talking in class.

The Dispatch phoned the teacher five times, but could not get hold of her.

During one call, an unnamed teacher answered the phone and said the teacher was busy and Saturday Dispatch should call later.

Thereafter her phone was switched off.

It is alleged the Grade 6 teacher used strenuous exercises as a form of punishment for the pupils.

She called one of the postures “the scooter”, in which the pupils had to act as if they were driving a scooter with their arms held out, their backs bent, while standing on the pads of their feet, heels off the ground.

Pupils spoken to said the teacher had called these “alternatives” to caning the pupils, but the principal at the school, Velelo Kalipa, described the acts by the teacher as “torture”.

One pupil said: “After a while your body starts to shake. Eventually your body becomes numb with pain.”

They said some of the children cried.

The alleged punishment against the 11-year-old pupil, who lives with her grandparents just a stone’s throw away from the school, took place last Friday.

She was rushed to Bhisho Hospital on Sunday evening after her arms became swollen and she complained of severe pain in her upper body.

The child had suffered tender muscles on both arms, tenderness on shoulder joints, and decreased range of motion on both shoulders due to tenderness and pain.

The doctors said she needed to undergo physiotherapy.

Saturday Dispatch this week visited the school, where principal Kalipa told the Dispatch that the teacher had admitted to subjecting the pupils to the punishments.

Saturday Dispatch spoke to three Grade 6 pupils who confirmed that the teacher made them hold these poses as a form of punishment for talking in class or not completing homework.

Kalipa said when the 11-year-old pupil’s grandparents informed him last week of the doctors’ findings and what had happened to their granddaughter, he immediately contacted the department of education.

“They came to me on Wednesday, and I immediately contacted the department of education.

“The education department’s superintendent-general Themba Kojana and an inspector from the department were sent to the school.

“The teacher was called to my office where she admitted in front of the inspector that she was doing this to the children,” said Kalipa.

Kalipa said he was furious about the incident and reports from the pupils because he was strongly against corporal punishment.

The principal said that on the day that the inspector visited the school, he found about 12 pupils kneeling next to their desks and the whole class demonstrated what they were made to do.

“She is not disciplining these children; what she is doing is torture, she is inflicting severe pain on these children,” said Kalipa.

One pupil demonstrated some of the exercises to the Dispatch.

“It is painful and at some point your legs starts to shake,” said the pupil.

Another pupil said the punishment could go on for a few minutes, or even up to two 45-minute periods – a painful 90 minutes.

Kalipa called for the immediate suspension of the teacher while the matter was being investigated by the department.

Spokesman for the department of education, Malibongwe Mtima, confirmed that the matter was being investigated and that the rapid incident report unit was intervening.

“We have sent inspectors to the school to gather some evidence and the investigation is ongoing,” said Mtima.

At this stage they were unable to divulge the evidence they had found as it would jeopardise their investigation, Mtima explained. — arethal@ dispatch.co.za