Massive whale washes up in EL 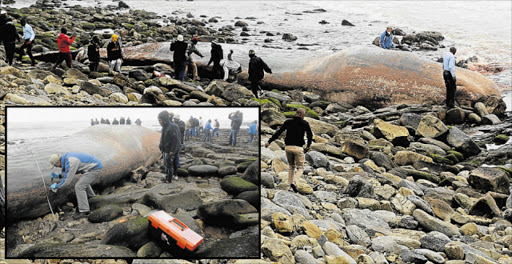 Kevin Cole, East London Museum principal scientist, said: “The washing up of the whale was first reported to me at 2.30am by Siani Tilney, chief of marine services for BCM. It is safe to say the whale washed up late last night. It is an exceptionally large, fully developed male sperm whale.

“The average sperm whale is 17.3 metres long. This one is 18.4 metres. It is also heavy for a sperm whale, weighing in at 40 tons. I have examined the whale and did not see any trauma to the body. There are bites but these are likely to have occurred post-death from opportunistic sharks. There were also no strange liquids coming from the whale.

“In this case it is most probable that this was a fully developed adult at the end of its life. This is indicated by the fact that it was showing signs of malnutrition. We also found parasites on the outside of its body which indicates that it was moving very slowly. This was probably a natural death.”

Cole said that no one had removed parts or meat from the whale. “I must compliment first the aquarium for quickly securing the area and then BCM security and the South African Police Service for providing support.

“People should be aware that it is illegal to remove parts from a whale,” he said.

“It is very dangerous to eat whale meat. They carry diseases which we are not used to as humans.”

As to what is to be done with the carcass, Cole said: “We are waiting to see if the high tide will wash it out today . If it does not then we will have to work with Buffalo City on other means of removal.”

The washing up of sea mammals like whales and dolphins has become a common occurrence in the area. Last month four humpback whales, three adults and one juvenile, were washed up along the coast.

“Most died from natural causes. One of the adults was too decomposed for us to do any tests on and the juvenile humpback showed signs of ship strike,” said Cole.

He said that there could be a variety of reasons for the frequent washing up of whales.

“Polluting of marine water can cause these creatures to become sick as they are just like us. Ship strikes, seismic activity and seismic blasting can all harm sea mammals,” he said.

Despite the frequency of whales being washed ashore there is in fact an increase in their overall population.

Veteran Kenton-on-Sea ski-boat angler and Rhodes University tax professor Mathew Lester said yesterday: “Research is showing that whale populations are improving at a rate of one percent per year, although the total is still only at 20% of their original biomass.

“Whales come to our coastline at the start of winter to feed, and return to the southern oceans next month.”