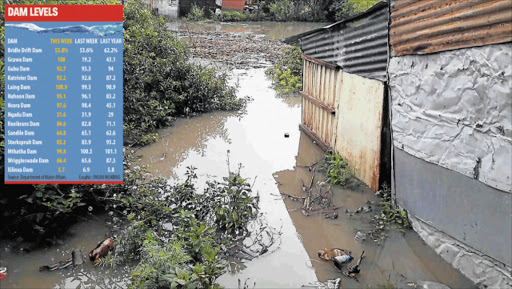 Water swept through shacks, damaging belongings, leaving residents stranded amid sodden wreckage and trying to salvage whatever they could.

Yvonne Visagie, who lives in Muvhango informal settlements outside East London, woke up to find herself trapped under a large tree which had fell onto her shack.

Trapped underneath the rubble of the tree and zinc sheets and unable to move her head, Visagie said she screamed to neighbours for help. “I could only move my body. The tree was on top of my head. Neighbours had to pull me out because the tree was too heavy to lift out of the way.”

Visagie said the tree had wrecked her shack and left her scratching around to see what was left of her possessions.

“My body is still in pain and there’s a lot of damage, but I am grateful that I did not sustain any serious injuries.”

Hani Park resident Noluthando Magalela, who lives with her four children and grandchild, said two years had passed since she was placed on a list to receive RDP housing from Buffalo City Metro (BCM).

Magalela dreaded rain. It meant she and her family had to live in a damp shack. “My appliances have stopped working and my furniture is damaged. We’re swimming inside the shack right now because we don’t know how to get out.”

Thobela Pekula, also of Hani Park, said streamwater flowed into their roads, making it nearly impossible for cars to move. “We only ever get attention when it rains, then when it stops, water dries up and we’re forgotten about once more. ”

l The Department of Water and Sanitation in the Eastern Cape said that major water systems in the province still face a serious struggle despite the recent rain.

In the 24 hours between Wednesday 8am and yesterday, the Port Elizabeth weather office recorded 84mm in Port Alfred – more than any other town in the region.

Queenstown and Mthatha weren’t so lucky, with 28mm and 20.2mm respectively.

Department of Water and Sanitation spokesman Sputnik Ratau said: “The dam levels around the Eastern Cape are continuing to decline every week despite the little rains that sometimes fall.

“Our systems, such as Algoa and Amatola, are struggling very seriously.”

He said that the Amatola system, made up of six dams and serving the BCM area, had declined from 68.6% to 67.6% this week.

The Algoa system, consisting of five dams and serving Nelson Mandela Bay, has also dropped 1% from an already low 29.6% to 28.6%. — nonsindisoq@dispatch.co.za