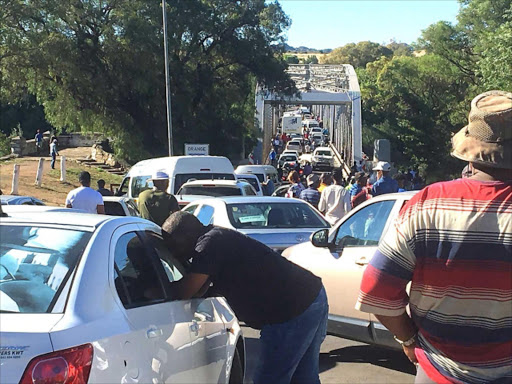 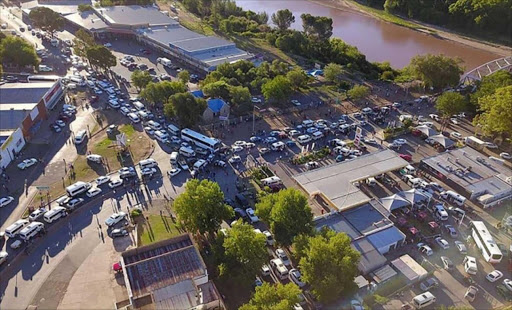 Homeward-bound holidaymakers have found themselves victimised and trapped in the middle of an acrid fight between the community and the municipality in Aliwal North.

In a disaster for Eastern Cape tourism, which relies heavily on festive season visitors from the north, protesters from Aliwal North have played cat-and-mouse with the authorities for the last three weeks.

Members of the community have been blockading the critical N6, and despite being chased off and the road cleared, they have returned to cause havoc for perplexed travellers.

Pictures on social media show cars jammed up along the N6 and lined up across the famous Hertzog Bridge over the Orange River which marks the boundary between the Eastern Cape and the Free State at Aliwal North.

The authorities said the trouble on the N6 was expected to continue this week.

At the centre of the row is the failure of the newly amalgamated Walter Sisulu municipality to settle its R141-million bill with Eskom, which has been turning Aliwal North and Steynsburg’s power on and off every day since mid-December.

Matters became heated yesterday afternoon, and provincial traffic authorities and police had their hands full with a steady stream of vehicles trying to get out of the province.

Officials started diverting the holiday traffic from 176km away, at Komani, while inbound motorists had to travel extra hours through Burgersdorp in a bid to avoid Aliwal North.

Rantjie said more than 300 delivery trucks, taxis and vehicles travelling in and out of the province had been affected by the standstill, which at times caused traffic to stretch out for up to 6km.

The power cuts started on December 14.

Only Aliwal North and Steynsburg are affected by the consistent Eskom blackouts as they are the only two towns in the municipal jurisdiction that receive their power supply directly from the municipality.

The other towns which are not affected receive their supply directly from Eskom, according to Maletswai Residents Association spokeswoman Ella Mbana, who yesterday vowed to continue with their rolling road blockage protest until their electricity woes were addressed.

Mbana told the Dispatch that residents in the two towns were angry because they were buying prepaid electricity from their municipality and did not owe Eskom any money.

She said it was tantamount to financial mismanagement by their council to receive electricity revenue from them, but then refuse or fail to pay it over and service their debt to Eskom.

“We have been experiencing electricity shutdowns three times a day, every day, since December 14 for a debt that has nothing to do with us as residents.

“Our situation is very painful because we do pay for our electricity supply, while such revenue is misused for other purposes by our municipal authorities who seem not to sympathise with our plight.

“This has affected all residents in these areas.

“Even dead bodies in our mortuaries are affected by these ongoing power cuts,” Mbana said.

She said 60000 residents were affected by the power cuts, which came after their municipality failed on three occasions to honour their commitment to pay the escalating Eskom debt.

“We will bring the N6 to a standstill for as long as our municipality does not come to its senses,” Mbana said.

Yesterday morning, community members also “closed down” municipal service points such as the local traffic department and municipal offices where rates and services are normally paid.

They called for their troubled municipality to be dissolved and placed under administration.

Municipal manager Thembinkosi Mawonga yesterday confirmed that the new municipality had inherited the Eskom debt after the merger of Maletswai and Gariep municipalities in 2016.

He said they were struggling to make ends meet as they were under-funded while their expenditure was much higher than the revenue they collected, “forcing us to cross-subsidise”.

“Honestly we do not have any revenue base and the debt we inherited, we can do nothing about.

“The money we have is barely enough for us to even operate at break-even,” said Mawonga.

He said the ongoing protest was by “frustrated residents calling for attention”.

Mawonga said his municipality was busy engaging with Eskom and the provincial and national government “to see where a solution could come from”.

Rantjie said law enforcement agencies were on scene late yesterday in a bid to calm the situation.

She said a similar protest on Tuesday afternoon saw motorists being stranded in the area for over five hours.

“Their road closure on Tuesday started around 4pm and our law enforcement agencies were able to clear the last vehicle heading out of the province by 9pm.

“Hundreds of trucks, taxis and private cars travelling in and out of the province were affected by the standstill, hence we decided to divert traffic,” said Rantjie.

She also warned those who would be using the route to travel early or accommodate the inconvenience of extra delays at road blockades in Aliwal North.

By late yesterday, Rantjie said police and traffic officers were keeping a close eye on the situation. — asandan@dispatch.co.za