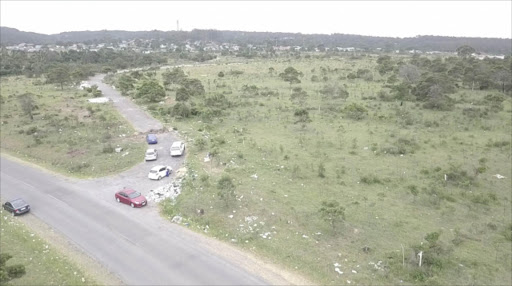 Vacant land believed to be owned by the municipality has come under siege this week, as scores of residents participated in what seems to be the biggest land invasion the metro has ever seen. Picture: SUPPLIED
Scores of residents this week participated in what seemed to be the biggest land invasion BCM has ever seen.

They have illegally earmarked government and private plots along the Buffalo Pass route and the R72, just outside Cove Rock using tree stumps and red tape among other items to mark “their territory”.

The land grabbing started on Monday this week with several local people leading the pack, while others came from nearby communities, many also came from afar to pin down and claim their stake of the property pie.

Luxury vehicles dominated among the cars piled up along the roads as aspirant property owners took to the open land to identify a spot.

BCM Mayor Xola Pakati condemned the illegal looting of land by residents saying there would be serious consequences. “I was briefed about the situation out there this morning and the directorate for planning has been out to assess. Once we have verified and confirmed ownership to the municipality, we will issue a court interdict against those land invaders.

“Already there are cases of land invasion the municipality is dealing with and law enforcement is on standby to ensure that nobody places any structures on any of the land.”