Breakfast of complaints served up to Mabuyane 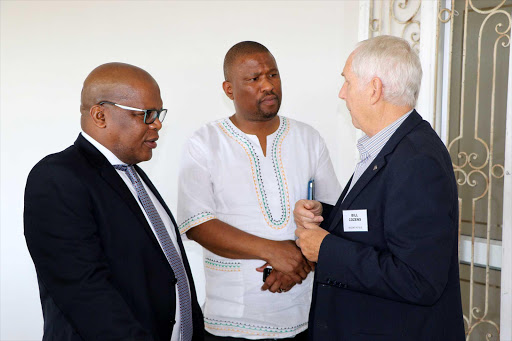 John Cupido of the Border-Kei Chamber of Business said companies wanting to transport items by rail to Durban had to send them via Bloemfontein and Johannesburg.

“The development of a direct rail link between these two cities “might be a long-term project but it requires strong leadership. This project can also ensure the Eastern Cape becomes a heavy-duty industry,” he said, adding it would drop the rate of unemployment and crime.

It was also said good rail links would cut back on the number of heavy trucks on the road, which destroy road infrastructure.

Other issues raised included existing infrastructure not being put to good use and the need for projects that would make good use of this infrastructure.

Gary McLean, from Charteris and Barnes accounting firm, said the Eastern Cape was suffering an “exodus of skills”.

He said the province has to retain specialists.

“But to do that we need a safe environment and an efficient city and development will flow from there.”

Buffalo City Metro mayor Xola Pakati said the metro had an “outstanding meeting” with Transport Minister Joe Maswanganyi and Transnet executives on the issues of infrastructure development and the ocean economy. However he did not give details.

“There is a road being built to link the Eastern Cape to Durban. We also have the Mzimvubu Dam project which will create more opportunities for the people of the Eastern Cape.”

Mabuyane, accompanied by ANC provincial treasurer Babalo Madikizela, said input given by the business fraternity would find expression in the policy-making process of the ANC, as well as at the upcoming provincial lekgotla.

Another burning issue raised, which had the potential to destroy business and shed jobs, was government departments’ late payment of invoices.

Business people complained of “facilitation fees” wanted by government officials before their invoices were paid.

Mabuyane came down heavily on the lack of consequence management.

“It is wrong for businesses not to be paid and this is all because of corruption. This is the behaviour and culture we must uproot,” he said.

He said businesses ended up taking government to court to get paid, and asked why people should have to pay legal fees before getting money for services rendered.

“Condemnation of this behaviour alone is not enough. The provincial leadership needs to stand up.” — zolilem@tisoblackstar.co.za