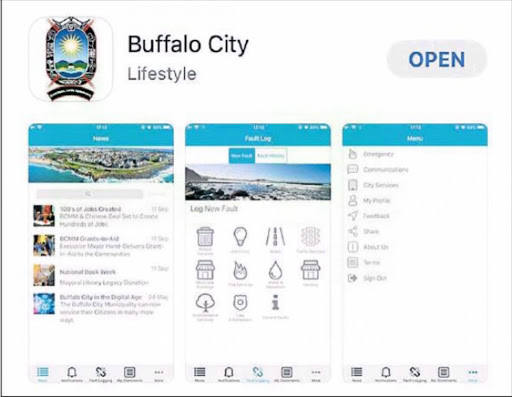 SMART CITY: A screengrab of Buffalo City Metro's new app
Buffalo City ratepayers can save time and energy avoiding queues at municipal offices by getting their statements, buying electricity and lodging complaints with the R3-million Buffalo City Metro application.

Developed by Microsoft partner ComUnity Systems and available for free download at the Apple Playstore and Google Play, the app is listed under “Buffalo City – Lifestyle” and just requires a name, telephone number, and BCM account number to access.

As well as accessing statements, BCM contact numbers and other general information, the app has a function where users can lodge a complaint and upload a photograph – be it of a pothole, non-working traffic light or dumpsite and send this information to BCM.

The Daily Dispatch tested the app and was able to download it effortlessly, view a municipal account, as well as log a complaint with a photograph attached.

A test text message sent to the BCM live chat facility under the “Communications” function at 2.44pm one day was responded to by 10.30am the following day.

However, the response was a few jumbled letters and it was unclear whether it was a computer response or someone has mistakenly hit some keys.

This is despite there being a “please enter your message below and the next available agent will respond”, so the challenge will be to see how the metro responds to communications made via this app.

“The introduction of this platform will help us reduce costs of operations, stimulate revenues and collection and very importantly, to do so at a fraction of the time and cost of other technology companies.

“The app is available on all mobile devices, both smart devices and older devices, such as feature phones, and computing platforms, which means it’s digitally inclusive.”

Stuurman said the customisation of the application started in late April 2017 and the first version for internal users was available within about six weeks after this.

“The app is delivered from a platform, which means that it is more of a customisation project than a development project and has been designed with the user at the centre of the system, which means careful attention has been paid to create the desired user experience.

“It has multiple facets to it, but besides looking good and working well, it delivers contextualised communications and services to the citizen so they don’t need to go looking for them, providing information that’s important to them, based on who they are and how they relate to the city so they get what they need, when they need it and it gets delivered to them on any device they choose or are able to afford.”

Stuurman said it took eight months for the live launch of the app. “For a project of this nature, it is a fundamental change to the way the city engages and services its citizens, so there was a fair amount of change management to ensure internal alignment.

“Citizens can now apply for housing allowances, indigent management, jobs advertisements and applications, as well as manage tender advertisements. It will also reflect BCM website content and allow for detailed citizen feedback for their views to be heard and serviced,” he explained.

Stuurman said complaints or faults reported through the application are simultaneously directed to the respective ward councillor and to the relevant department, while a reference number will be made available to the user for tracking purposes.

Cambridge resident Evelyn Jantjies, 69, who was at BCM offices to collect her monthly statement, said she was unaware of the new app.

“I’m not so techno savvy, but if it means I don’t have to come into town anymore, it would be a relief, because as is I am not getting my monthly statements which is why I come to enquire,” she said.

“When I sometimes complain to my councillor, I never know what he does about it, I hope the app will also help us track where and how our cases are progressing. — mbalit@dispatch.co.za