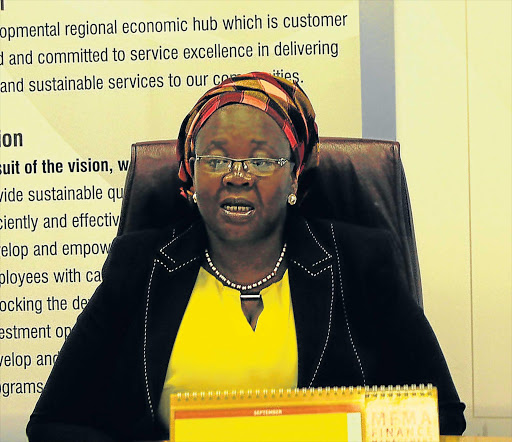 DISMISSIVE: Enoch Mgijima municipality mayor Lindiwe Gunuza-Nkwentsha has refuted claims that she stole a cow
A cow, its missing horns, skull and ears, and R12000, are at the centre of a controversy which is likely to result in the axing of an Eastern Cape mayor soon.

This after Whittlesea farmer Zoleka Mgijima filed a complaint at ANC headquarters in King William’s Town when her cow went missing from the Komani municipal pound in December 2016.

The ANC’s provincial working committee (PWC) found, in an 18-page report tabled at last weekend’s meeting in Calata House, that mayor Lindiwe Gunuza-Nkwentsha was guilty of taking the cow. She has been ordered to pay for it, as well as compensation to Mgijima. The PWC said these payments should come from her government pension.

The Dispatch reported at the time that EFF councillors had opened a stock-theft case against Enoch Mgijima mayor Gunuza-Nkwentsha and petitioned her speaker last February.

A whistleblower allegedly spilled the beans claiming she saw the skin of Mgijima’s cow hanging over the fence at the mayor’s village home in Tarkastad, a few days after the cow had been reported missing.

While the ANC conducted its own investigation, and police dropped criminal charges against Gunuza-Nkwentsha, Mgijima went to Calata House and produced evidence that, in fact, someone from the Enoch Mgijima municipality had indirectly admitted to the incident by transferring R12000 to Mgijima’s account as an out-of-court settlement.

But the amount was a far cry from the R50000 the complainant was expecting to receive for the cow.

She said the cow had been earmarked by her ancestors and was going to be slaughtered for a thanksgiving traditional ceremony in the same week that it went missing from the pound.

Mgijima confirmed to the Dispatch yesterday that she had been summoned to the municipal offices in Komani, in December, where she was told to sign a letter confirming that she was dropping the case against Gunuza-Nkwentsha.

This was after the R12000 had been transferred into her bank account.

But Mgijima said this was a raw deal “because I had already paid a lot in preparing for the ceremony. The R50000 would have covered that. To top it all,” she said, “I suffered a stroke and my left arm is numb. I have to consult doctors regularly. Who is going to take responsibility for such costs. I told the ANC leaders that it can’t be myself or my family either. This R12000 is a raw deal.”

ANC bosses now want its councillors in Enoch Mgijima to investigate who illegally transferred R12000 into Mgijima’s account and on whose instructions.

Mgijima, a direct descendent of Enoch Mgijima, the ANC veteran after whom the municipality is named, reported the case of stock-theft in June, after her cow went missing while being held at the municipal pound. The pound fined her R3900 to get her cow back, and she settled the bill, but when she went to fetch her cow it was nowhere to be found.

Gunuza-Nkwentsha confirmed hosting a traditional ceremony at the time, “but I used my own money and sent someone to buy me a cow”.

The allegations now form part of a case against the mayor. ANC Chris Hani regional secretary Lusanda Sizani has confirmed she would be booted out at the next council meeting, in line with ANC resolutions.

Sizani said: “The owner of the cow has produced evidence that R12000 was transferred from the municipality into her bank account, and to us, as the ANC, that is fraud.

“We have assigned the council to form a task team to investigate who authorised such an irregular transaction, because we were still busy investigating this case. It has now become a criminal case and the council has to follow it to the letter and report the culprit to the police.”

lPays Mgijima’s medical bills which she continues to incur following a stroke due to the loss of her cow;

lMakes the payments “from pension fund,” the report states; and

lMust be subjected to a disciplinary hearing for bringing the ANC into disrepute “while handling the cow matter”, the PWC report reads.

The mayor distanced herself from the matter, saying: “I was arrested in February 2017 for stocktheft, but I have yet to see the owner of the cow.

“The case, which has been dropped due to lack of evidence, was filed by the EFF, not the owner of the cow. So I don’t know what you are talking about,” Gunuza-Nkwentsha said.

Sizani said the cow case and other service delivery-related issues were cited as the main reason to call for the mayor, speaker and chief whip’s replacement.