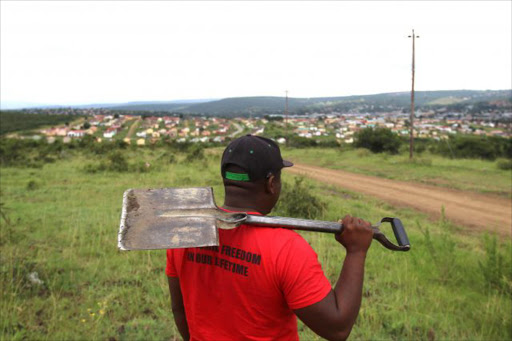 LAND GRABS: An Eastern Cape township has started land invasion as Ginsberg community members outside King William's Town started occupying vacant land. Community leader Mziyanda Hlekiso was at work clearing up his plot Picture: MICHAEL PINYANA
The residents of Ginsberg outside King William's Town have embarked on land grabs after they occupied a vacant piece of land in the area.

This is not the first time residents of Buffalo City Metro have had land invasion. Ginsberg Civic Association treasurer Mziyanda Hlekiso said this was to send a message to government to start housing projects in the area as the last time RDP houses were built in the area was in 1995. Ginsberg is the hometown of former Black Consciousness Movement leader Steve Biko. Hlekiso said government has made a lot of empty promises to the members of the community. "Only phase one of RDP houses had been done here while other townships are on phase four. The last time Buffalo City Metro came here to talk to us about housing development was after we had a service delivery protest in 2014," Hlekiso said.