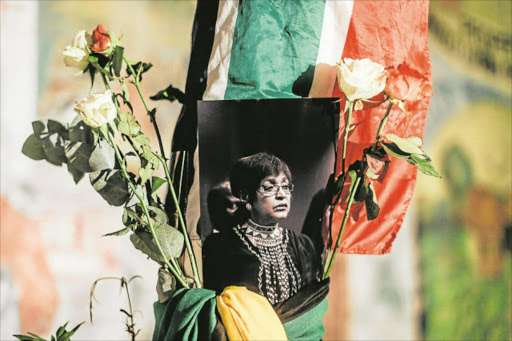 DIGNIFIED: A photograph of Winnie Madikizela-Mandela surrounded by the South African and ANC flags at the Old Durban Prison’s Human Rights wall as mourners gather to pay their respects during a candlelight vigil in Durban Picture: AFP
By SIKHO NTSHOBANE and ZINGISA MVUMVU

The mayor of Alfred Nzo, where the late Winnie Madikizela-Mandela was from, joined the Eastern Cape premier and the ANC in the province in describing the passing of the former ANCWL president as a great loss to the province.

As tributes continue to pour in for the 81-year-old “mother of the nation”, Alfred Nzo district mayor Sixolile Mehlomakhulu yesterday described her as their district’s greatest daughter ever. The struggle icon was born and raised in Mbongweni village in Mbizana, within the Alfred Nzo district.

Mehlomakhulu said the pain felt by the Mandelas and Madikizelas was the same as that affecting the people of Alfred Nzo. “We wish to send our deepest condolences to the Madikizela and the Mandela families. The entire Alfred Nzo district mourns with you,” he said.

In 2016, Mehlomakhulu had bestowed the much loved icon with an executive mayor special award at the third annual Alfred Nzo communicators and media awards for her role in the liberation struggle, her tireless work and efforts in uniting and developing a democratic South Africa.

The ANC in Calata House said Madikizela-Mandela’s life was one worth celebrating for the role she had played in getting South Africa to be among the most revered constitutional democracies in the world.

Premier Phumulo Masualle said Mama Winnie was the light that continued to shine bright and kept hope alive during the dark days of apartheid, when many anti-apartheid ANC activists were either in jail or exiled.

Masualle said youth activists in the height of apartheid in the 80s were inspired by the fearless spirit of the fallen “spear of the nation”.

Said Masualle: “As youth activists who were organising from inside the country at the height of apartheid, we derived much inspiration and fortitude from uMama Winnie as she gallantly led from the front in the fight against the violent machinery of the apartheid police state.

“Her very being stood as a symbol of defiance against a belligerent state. She is a global icon and ambassador for liberty, not only to anti-apartheid activists the world over but also to the masses of the downtrodden and oppressed all over the world.”

ANC provincial secretary Lulama Ngcukayitobi said Madikizela-Mandela was a source of inspiration to all and a revolutionary par excellence who epitomised selfless leadership. “She inspired a generation of leaders who have since swelled the ranks of the democratic movement and our government. To us she has left a huge footprint that tracks our history of suffering and resilience under immeasurable harassment and dehumanisation under the apartheid regime.”

Meanwhile the AmaQwathi tribe has described Madikizela-Mandela as a woman of substance.