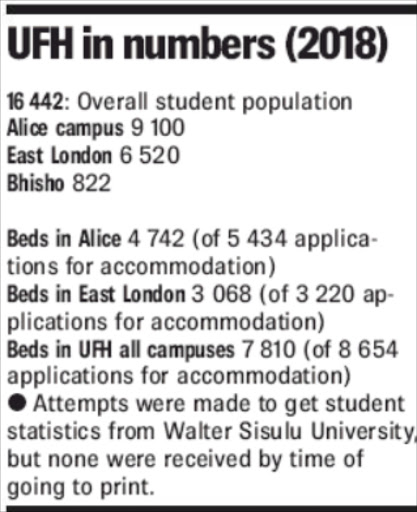 ufh numbers
Newly-appointed Higher Education and Training Minister Naledi Pandor has approved a R1.1-billion student housing grant for this year for all of the country’s 26 universities.

The other two in the Eastern Cape – Nelson Mandela University in Port Elizabeth and Grahamstown-based Rhodes – were allocated R50-million and R40-million respectively.

Pandor’s spokesman, Lunga Ngqengelele, said she was doing her best to deal with the “huge” accommodation and infrastructure backlogs in South African universities. The funds have already been transferred.

UFH and WSU have been hardest hit by accommodation backlogs, with young people taking to the streets at the start of each academic year to bring their plight into the spotlight.

UFH vice-chancellor Professor Sakhela Buhlungu said the university had surpassed expected standards as it offered 50% of its students a place to stay, in both Alice and East London campuses.

“It is very uncommon for any university in the country to accommodate the number of students we do in our residences and that is something we are pleased about and so was the portfolio committee in parliament when they learnt about this,” said Buhlungu. “What this grant will do is help us continue the construction of the Alice student village – a major project that was put on hold because funds got exhausted. This amount will enable us to accommodate 60% of students in our residences.”

WSU’s allocation is earmarked for provision of 300 beds at its Mthatha and Butterworth campuses.

The DHET has also approved a Macro Infrastructure Framework, which is aimed at channelling funds for specific infrastructure projects where resources are scarce, such as at UFH and WSU. However, the transfers – given the go-ahead by Pandor last week – come with conditions.

“It is the university’s responsibility to ensure that value for money is achieved and that the maximum number of beds is procured in accordance with the department’s policy for student housing at public universities,” wrote Pandor to the vice-chancellors, including Professor Buhlungu of UFH.

Use of the grants is also subject to universities submitting concrete plans by June showing how the funds will be used.

Ngqengelele yesterday said Pandor was “sympathetic” to the student plight of limited accommodation and understood their frustration, which at times boiled over in protest.

“But the minister urged students not to damage and vandalise existing infrastructure because that just adds to the backlog and redirects our attention,” said Ngqengelele.

“Making this R1.1-billion available is part of the government’s attempts to deal with this issue of huge student accommodation backlogs.

“We know it is not enough but we are trying to do what we can with the limited resources at our disposal.

“But this should also not be reduced to just beds as the bigger picture is also about making sure that the learning environment is conducive because proper accommodation is linked to the overall performance of the student.”

Ngqengelele said the department had limited resources to tackle the shortage of student accommodation on its own.

As such, DHET was working around the clock to bring the private sector on board through the Student Housing Infrastructure Programme (SHIP) 2016-2026 plan.

The ambitious plan, which was launched in July 2016, aims to provide 300000 new beds to the institutions of higher learning in the country over that 10-year period.

SHIP is estimated to have a staggering R60-billion budget for the provision of the 300000 beds to universities and TVET colleges.

“We are also working with the private sector through SHIP with the hope of seeing to it that the existing backlogs in student accommodation are a thing of the past by the year 2026,” said Ngqengelele. —