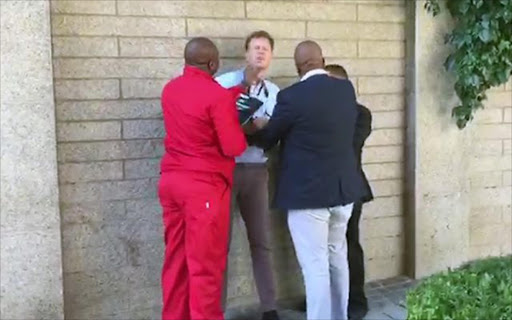 “The deputy speaker of the national assembly and the chairperson of the National Council of Provinces have confirmed that they have referred the assault of Netwerk24 reporter Adrian de Kock by EFF MP Floyd Shivambu to the for consideration‚” said Andisiwe Makinana‚ chairman of the parliamentary press gallery.

“The   will wait for that parliamentary process to be followed.”

Shivambu was filmed last month roughing up De Kock‚ who was waiting with other journalists outside a building where Cape Town mayor Patricia de Lille’s DA disciplinary hearing was taking place.

When De Kock saw Shivambu‚ he took pictures of him and tried to get comment from him about the inquiry. But Shivambu demanded that De Kock delete the pictures because he had not given him permission for them to be taken.

Shivambu left De Kock when other journalists approached‚ and issued a statement afterwards apologising for the incident.

On Thursday‚ De Kock‚ who laid criminal charges against Shivambu‚ said there had been no progress in the investigation.

“I have not heard anything from the police since then‚ not sure why it would take so long‚” he told TimesLIVE.

“It makes me think that nothing will come from it. What can I do? I’m just nervous to go back to parliament.”