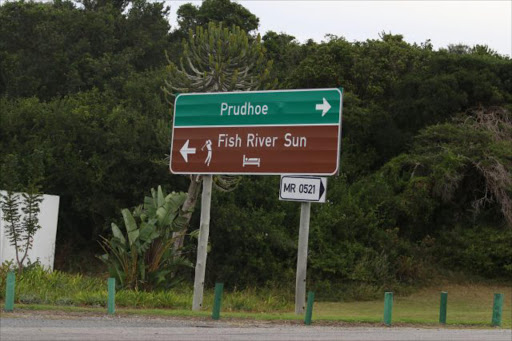 The Fish River Sun Hotel and Resort is part of the land claim won by Prudhoe village. Picture: MICHAEL PINYANA
Ululations and celebrations were the order of the day at the weekend in Prudhoe village in Peddie as a historic 20-year land claim was finalised in favour of the villagers.

However, the Mpekweni Resort is not part of Prudhoe’s claim.

In their fight to get their land back, the community was assisted by the Legal Resources Centre (LRC) in Grahamstown.

The community lodged their claim in December 1998 in terms of the Restitution of Land Rights Act, claiming the 26 farms that lay between the Fish and Mpekweni rivers from which they had been forcefully removed by the former Ciskei government during the late 1980s.

The forced removals were effected by the former homeland government to make way for large-scale agricultural development, as well as the Fish River Sun and Mpwekweni resorts.

According to the LRC’s Cameron McConnachie, the people were moved to Prudhoe farm, where they were given a vacant piece of land.

“The community received no compensation from the former Ciskei government for the land they had lost and were not provided with any assistance to rebuild their lives at Prudhoe farm.

“The land they were removed from remains largely unused, save for grazing,” said McConnachie.

“However, the Land Claims Court found that the Prudhoe claimants constituted a community and had a valid claim in respect of all the farms and dismissed the claim of the AmaZizi in respect to those farms.

“The court did, however, find that the AmaZizi community had a valid betterment claim in respect of certain tribal areas, which was not contested by the Prudhoe community,” McConnachie said.

The LRC reported that Judge AJ Barnes had, in a judgment handed down on Monday, been scathing about the role of the Eastern Cape Land Claims Commission in this case.

Barnes ruled that the commission:

lIssued poor referral reports on the claim and on the basis of these reports, and with no good reason, recommended that the AmaZizi community get the farms;

lRefused to take a view on the validity of the Prudhoe claim;

lRefused to agree with the commission’s own referral report recommending that the Prudhoe community should get the land; and

lRefused to admit that the Prudhoe community were “a community” for the purposes of the Restitution Act, despite the findings of a research report commissioned by the commission itself.

Barnes found that the commission, in this matter, failed to uphold the standard set in Section 195 of the Constitution in which organs of state were expected to act in accordance with democratic values and principles, including a high standard of professional ethics and efficient use of state resources.

Gladman Tom, chairman of the Prudhoe community land claimants, in his report-back to the community about their victory, said: “This is a victory that was welcomed by our people. Developers have been knocking on our door as they want to partner with us on this land,” said Tom.

There are no commercial farms in the area as all the farms, according to McConnachie, were removed in the 70s. “The community later moved in the mid-80s to the piece of land they are currently occupying,” he said.

Tom said about 350 households were affected by the forced removal.

“It was a sad moment when we were moved and dumped where we are currently.

“We are not going to move back to the land but we will use it for the benefit of the community.”

The claims have dragged on for years and divided the communities, mostly between Mfengu and Gqunukhwebe tribes.

Last year he told the Land Claims Court of attempts to find common ground between the AmaZizi, Prudhoe and Tharfield communities, which had all lain claims in the area.

The LRC said in 2010, the Fish River Sun Hotel was awarded to the AmaZizi community with no consideration of the Prudhoe community’s competing claim.

In 2011, the Supreme Court of Appeal rescinded the order and ruled that the Land Claims Court reconsider the merits of all the claims over all the land and determine which community had a valid claim.

“The case before the Land Claims Court took more than seven years and was plagued by various delays.” — bonganif@dispatch.co.za