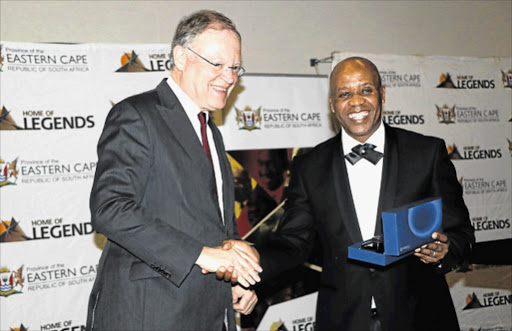 TWO-WAY STREET: The delegation from German's Lower Saxony province touched down in East London yesterday and enjoyed a reception dinner at the East London ICC with, from left, Lower Saxony Prime Minster Stephan Weil and premier Phumulo Masualle where the latter received a fountain pen from his German counterpart Picture: ZOLILE MENZELWA
There are good investment returns to be made in the Eastern Cape, which is part of a new surge of optimism similar to that enjoyed in 1994, Premier Phumulo Masualle said at a gala dinner attended by 40 business people from German’s Lower Saxony province.

Masualle was speaking during a reception dinner for the German delegation led by Lower Saxony Prime Minister Stephan Weil at the East London ICC on Tuesday evening.

He told his guests: “We have businesspeople here we would like you to seriously engage and partner with.”

He said German investments in the Eastern Cape were “critical to develop our countries”.

Masualle said the Eastern Cape and the country were great places to invest and compared an atmosphere of hope in the country to 1994, the year of the first democratic election.

Masualle said the Eastern Cape was embracing a spirit of renewal despite setbacks and detours.

The partnership between the two provinces started 23 years ago under the premiership of the late Robben Island political prisoner Raymond Mhlaba, also the province’s first premier.

He said the country was dealing with a project of “democratising” the country to ensure prosperity for all.

“I am sure you being here with us and the delegation you lead will add impetus to that resolve and we will see more of this collaboration for mutual benefit. You have already shown interest in the area of tourism, and believe me we have the most beautiful scenery you can ever find in this country,” the premier said.

Weil said it must have been an adventure for all involved when the partnership started in 1995.

“There have been experiences with each other and while it is a risk to start such a cooperation, now we can look back to more than two decades and see it has grown.” Weil said while governments come and go, the benefits of partnerships should be sustained and enjoyed by many people.

“Partnership is sustainable if it is run by many people in different spaces. For example sports, culture, economy and environment and many other sectors. We must not only talk about our friendship and cooperation but work on it with concrete results,” Weil said.

His province would work hard to strengthen the “beautiful” cooperation between the two provinces, he added.

The two provincial political heads exchanged gifts, with Masualle receiving a fountain pen and Weil a painting of the Big Five. —