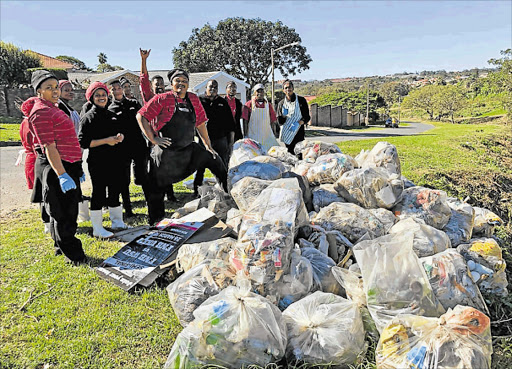 THREE CHEERS: Amalinda SuperSpar store owner Kishor Natha and his staff rolled up their sleeves yesterday and cleaned up the unbearable sight of a littered open public space Picture: SUPPLIED
Proving that a little good can go a long way, Amalinda SuperSpar managers and staff got out of their store yesterday afternoon and cleaned up a litter-strewn park outside the mall.

The team of 18 dedicated two hours of their day in their bid to do a bit of good to save the environment.

They filled more than 20 refuse bags with tossed away plastic and other rubbish, such as shoes and unsightly paper, which had been thrown on the open piece of land across from the mall.

Kishor Natha, the store’s co-owner, said they felt compelled to tidy up the park, which became an eyesore after overgrown grass was cut by an unknown company.

“The company removed the grass and tree branches, but once that was gone it became clear just how dirty the park really was. It looked untidy and unkempt.”

Natha said he grew tired of the sight, and involved his co-workers, who welcomed the idea with enthusiasm. “It was a fulfilling feeling and there’s still an opportunity to do more. We couldn’t clean up the entire park because we ran out of time but we’ll definitely be going back to clean up some more.”

He said the clean-up was an extension of Spar’s no-to-plastic-bags campaign. “We are busy doing away with plastic bags in our stores because of the harmful effects on the environment. It really was a no-brainer; anyone who passes there could see how bad it was.

“We decided to stop complaining about it and instead do something to keep the environment clean.

“We would like to encourage other individuals and businesses to join us in keeping Amalinda and greater East London clean. We all complain about the state the city is in, but let’s rather do things differently and play our part. Plastic doesn’t deteriorate, it accumulates,” he said.

Buffalo City-based eco-activist and publisher of the Facebook page My Green Page, Caron Williams said: “Kishor and his team are taking action and setting a good example. They are getting involved with the community and cleaning up Main Street. Well done to Amalinda SuperSpar!” —