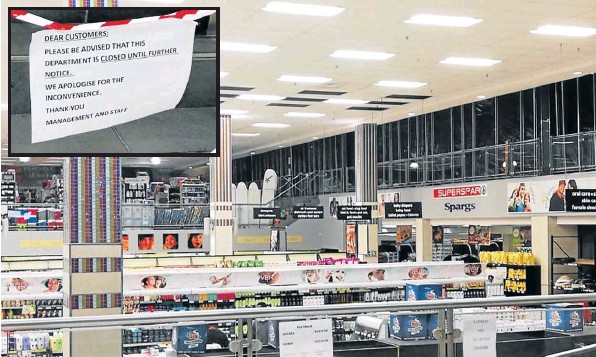 CLOSED: The clothing and textile department at Superspar Spargs in Beacon Bay is has been closed off indefinitely after its toy section caught fire in the early hours of Thursday morning.
Image: Nonsindiso Qwabe

A fire broke out apparently in the toy section of the enormous and popular Spargs SuperSpar in Beacon Bay in the early hours of Thursday.

Spargs management declined to comment on Friday, but shoppers said they were told an electric toy had caught fire.

The extensive clothing and textile department was still closed on Friday.

Dispatch visited the store and saw that the entire north-east section of the top floor is walled and cordoned off with red tape and black plastic.

When asked for comment yesterday afternoon, the store’s pubferent lic relations officer Mary-Ann Engelbrecht said: “Unfortunately the person that can help has already left for the weekend. Nobody at head office is available to comment. They will only be back on Monday.”

A Spargs employee told the Dispatch that the fire broke out around 6am on Thursday at the toy section. She said order had been restored a few hours later.

A shopper, who asked not to be named, said that when he went to the store on Friday morning he was told by floor workers that the section was closed off due to fire and smoke damage repairs.

“The worker told me that a toy that had been plugged into the wall caused sparks and caught fire.”