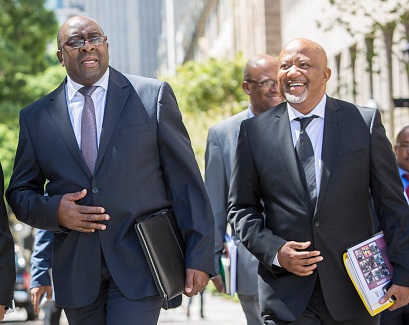 Nene said he met with Jonas on Monday October 26 on a balcony at the National Treasury.
Image: Halden Krog/Bloomberg via Getty Images

“Who are they to offer you the job of Minister?”

These were the words finance minister Nhlanhla Nene uttered when his former deputy Mcebisi Jonas told him that the Guptas had offered to hand him Nene’s job.

Testifying before the Zondo commission on Wednesday‚ Nene confirmed Jonas’s evidence in August that he had informed him of the bribe offer in October 2015‚ about two months before Nene was axed in a cabinet reshuffle. He was returned to the finance portfolio by President Cyril Ramaphosa earlier this year.

Nene said he met with Jonas on Monday October 26 on a balcony at the National Treasury.

“I could see that Mr Jonas was flustered. He informed me of an uncomfortable meeting he had with Mr Ajay Gupta‚ Mr Fana Hlongwane and Mr Duduzane Zuma in Saxonwold. He told me that during that meeting‚ he was offered the position I was holding at the time‚ that of Minister of Finance‚” Nene said in his statement.

He said Jonas told him Ajay Gupta had offered him R600‚000 in cash immediately and a further R600 million to be deposited in an offshore bank account.

“Mr Jonas told me that he rejected the offer of the deposit and the cash that he was invited to take immediately.”

In affidavits to the commission‚ Ajay and Rajesh Gupta‚ Hlongwane and Zuma have all denied Jonas’s claim.

Nene said Jonas told him that the Guptas were aware of an intended cabinet reshuffle and that they had informed him that they were influential in the removal of certain ministers from their positions.

“I recall saying to Mr Jonas ‘Who are they to offer you the job of Minister?’”