Khayelitsha fire victims battle to put their lives together again 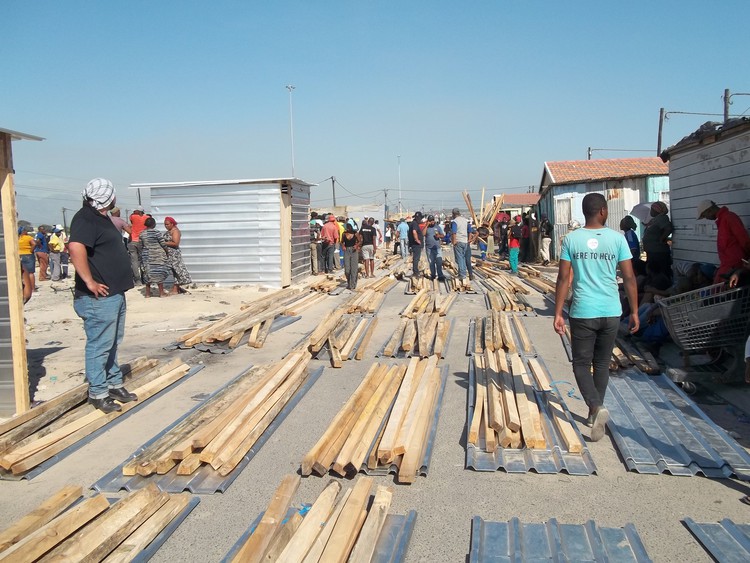 According to the City, the fire on Saturday morning in Silvertown, Khayelitsha, affected 342 households. By Wednesday afternoon, the City said it had delivered all its rebuilding kits to registered fire victims
Image: Vincent Lali

Nompumezo Adam is trying to rebuild her burned shack in Silvertown‚ Khayelitsha‚ so that her daughter can come home with her newborn baby.

Adam’s daughter gave birth in the community church hall‚ where she took shelter after a fire devastated Silvertown over the weekend.

“I’m trying to get building material for my daughter who gave birth to a girl‚ but I have not yet received it. She is still at the hospital‚” Adam told GroundUp on Tuesday.

“I struggle to get food and have not eaten today.”

On Tuesday‚ dozens of fire victims were waiting for materials supplied by the City of Cape Town to rebuild their shacks.

“The victims are tired of sleeping at the [community] hall. Everyone wants to go back home now‚” said Thandi Msutu‚ deputy chairperson of the Khayelitsha Development Forum.

Msutu said some fire victims were sleeping outside their unfinished shacks so that they could watch over their materials.

“The victims who have got the materials build first and encroach on the plots of their neighbours‚” said Msutu.

Mfabe said‚ “I can’t take off my clothes and bath while there are kids around - and your belongings easily get stolen at the hall.”

Vuyokazi Manisi got a handyman to rebuild her shack using old‚ charred building materials as well as material from the city.

“The building materials I have received are not enough to rebuild my big‚ three-room shack‚” she said.

Manisi said she wanted to have her own room and her two school-going kids to have theirs.

“Although the new building material is not enough‚ I’m thankful to the city.”

Meanwhile‚ she is living at a friend’s place in Makhaya nearby.

Ward councillor Thando Pimpi said the fire victims all get the same amount of building materials‚ regardless of the size of their previous shacks.

“Some residents buy themselves building materials or use their burnt materials because they have lost patience with the city‚” he said.

“The registration takes long. The victims come and stand in long queues for the whole day and return to the community halls and community churches without building materials.”

He said he had tried unsuccessfully to get the city to give pregnant women‚ elders and sick residents priority treatment.

Some residents‚ who said they suffered from illnesses such as diabetes and high blood pressure‚ said they had not yet received building materials. Some had lost their medication in the fire; others said they had no food.

Ntombovuyo Mbelezi‚ who has a nine-month-old baby‚ said they were sleeping on a sofa at a friend’s place in Town Two. “My baby is crying for food because she is hungry. The city is not giving us baby food.”

Mbelezi Lebo Mabi said‚ “Our kids go to school wearing civvies because their school uniforms burned. They don’t even have books.”

According to the city‚ the fire on Saturday morning affected 342 households.

By Tuesday afternoon‚ the city said‚ it had delivered 70% of its rebuilding kits.

By Wednesday afternoon‚ it said all fire kits had been delivered. Before the kits were delivered‚ the sites were cleared of debris‚ levelled if required and an extensive survey and verification process of the affected people was undertaken‚ the city said in a press statement.

“In the last financial year‚ the city spent approximately R30-million on emergency materials and has made significant improvements to the emergency fire kits that are issued to victims.

“Our minds cannot comprehend the loss that these families have experienced‚ but we are grateful that we could at least provide them with the physical materials to start rebuilding a home‚” said mayoral committee member for Area East‚ councillor Anda Ntsodo.

Money donations can be made to the Mayoral Relief Fund (GroundUp has no responsibility for this account or how the funds are spent):