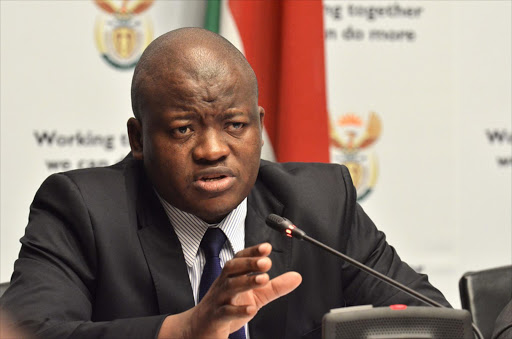 Former director-general Lungisa Fuzile, pictured, told the state capture commission on Thursday that he had never seen an adviser appointed as quickly as Mohamed Bobat was. Bobat issued instructions at the Treasury even before Des van Rooyen had been sworn in as minister.
Image: Trevor Samson

A suspected Gupta ally who parachuted into National Treasury as an adviser to former finance minister Des van Rooyen allegedly acted as a law unto himself‚ handing out instructions to senior officials even before the minister was sworn in.

In his testimony to the state capture inquiry on Thursday‚ former director-general Lungisa Fuzile described his initial encounter with one of Van Rooyen’s advisers‚ Mohamed Bobat‚ on December 10 2015 — the day Van Rooyen was to be sworn in as finance minister.

Fuzile said he was invited to the Union Buildings for the ceremony. It took place a day after former president Jacob Zuma sacked Nhlanhla Nene from the same position‚ sending the markets on a downward spiral.

"He (Bobat) looks towards me and greets me. I responded. And then he told me immediately‚ in fact as part of introducing himself‚ that he is the adviser to Van Rooyen and I was taken aback. I was taken aback because all the advisers that the department had had in my tenure had signed contracts with me. It’s like you’re meeting a person on whose appointment you were supposed to be a signatory and you know you never signed‚" Fuzile said.

"Theoretically‚ a minister can bring anyone to be their adviser‚ but as I say I was the only person with the authority (to sign their contract with Treasury)."

On Wednesday‚ Fuzile testified that he allegedly received a call from ANC economic transformation chair Enoch Godongwana on the night Nene was fired‚ saying that Treasury would receive a "Gupta minister" who would arrive with his own advisers.

Former Treasury director-general Lungisa Fuzile has taken the stand for the second day at the state capture inquiry. In yesterday's testimony‚ ...
News
2 years ago

Fuzile said when he met Bobat‚ he realised there was truth to Godongwana’s earlier statement.

He said he had never seen such speed in appointing an adviser in two decades of working in government. Van Rooyen had not yet set foot in the Treasury but had already appointed one.

Fuzile referred to a call he had made to Van Rooyen the night he was appointed‚ advising him to‚ among other things‚ issue a media statement after being sworn in that may quell tension in the markets.