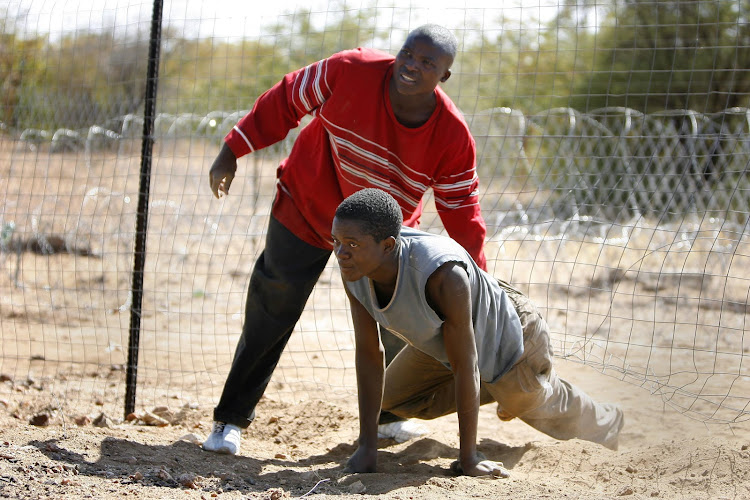 The country's porous borders was highlighted by three trips to gauge the state of South Africa's borders which have revealed broken fences and more.
Image: James Oatway/file

The visits‚ undertaken by the DA over the past month‚ painted a grim picture‚ the party said on Thursday.

“Astoundingly we came across areas of the fence which had been cut through‚ as well as a big open and unmanned gate large enough for a truck to drive through‚” said MP Jacques Julius‚ party spokesperson on immigration after a trip to the Beitbridge border in Limpopo between SA and Zimbabwe on November 12.

“SANDF [SA Defence Force] members we spoke to… indicated the crucial need for a proper fence‚ but also to clear the area 100m from the fence‚ for watch towers‚ infrared equipment and drones‚” he said‚ referring to an inspection of the Manguzi border in KwaZulu-Natal between SA and Mozambique on November 13.

“We were able to cross into Mozambique‚ buy fish‚ and cross back into SA.”

Julius said the party engaged there with terrified communities who were being “taken advantage of by carjacking syndicates.”

“We also learned that there are people coming across the border to collect social grants and shop in SA before returning across the border. This issue is not tied to people who wish to stay in SA‚ but rather people whose unimpeded movement into our country allows them to exploit benefits intended for South Africans.”

The party said that authorities needed to investigate the alleged social grant fraud.

At the Skilpadshek border in the North West on the border with Botswana an SANDF official revealed that the border did not have an appropriate fence‚ only an agricultural fence.

Julius said the DA would seek an urgent meeting with the SANDF to discuss concerns and challenges faced by the military in securing the country’s borders.

Vendors at the Chirundu border post linking Zimbabwe and Zambia have been selling human stools to travelers after the northerly neighbour resorted to ...
News
2 years ago