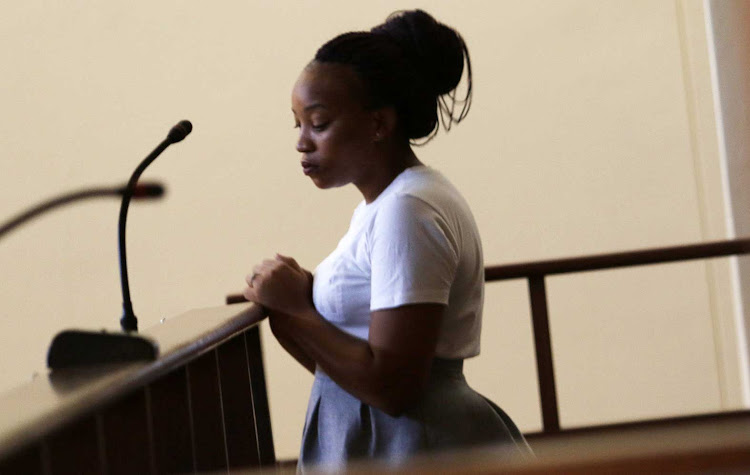 Siphumeze Nangu, who is suspected of murdering her fiancé, in the Zwelitsha magistrate’s court.
Image: Michael Pinyana

Murder-accused Siphumeze Nangu, who stabbed her fiancé to death, has told the Zwelitsha magistrate’s court that she did it in self defence while she was being beaten by her drunk boyfriend in early hours of February 1.

Nangu, 24, said she did not mean to kill Mkhanyisi “MK” Bana, 36, during the heated argument. It was while she was being slapped, kicked, punched, strangled and pushed to the ground that she picked up a knife and “accidentally” stabbed Bana, she says in an affidavit read out in court on Friday by her defence attorney Mzwamadoda Mancotywa.

It was not the first time that her live-in lover had assaulted her, magistrate Nokwanda Nkume heard.

Nangu was making her formal bail application when she told the court that she would plead not guilty to the murder charge.

She said she had no intention to kill Bana when he pinned her to the cupboard, strangling her until she “lost breath”.

This was after he had slapped, strangled and punched her a number of times.

Nangu confirmed that on February 1 – the same day Bana was killed – the couple were planning to visit the local home affairs office and quietly get married.

Bana, a fitness fanatic, bootcamp instructor and cricket enthusiast, was an administration official at the provincial police headquarters in Zwelitsha at the time of his death.

A young couple’s apparent plans for marriage were ended dramatically when the would-be groom was killed hours before they were to be joined in ...
News
2 years ago

Nangu was an administration intern there. She has been in custody since February 1.

In her affidavit, Nangu said on that day she had gone to a braai with friends and had constantly been in touch with Bana.

“At around 11pm, we went to Tshatshu village to pick up clothes belonging to one of our colleagues who was to leave for Port Elizabeth. We then moved to Sweetwaters to drop off a colleague before I was taken home.

“When I was dropped off by [a police sergeant], the deceased was standing outside, visibly drunk as he was drinking with some of his friends.

“He started to hurl insults towards the sergeant who had dropped me, accusing him of having an affair with me.

“When I intervened and tried to explain to him that I did not have a romantic affair with the guy, but had asked for a lift home, he started slapping me, dragged me inside the house, locked both the door and burglar gates, before he assaulted me further,” she told court.

She added: “It was not the first time he had assaulted me and later apologised and I forgave him as we were deeply in love.”

Nangu told Nkume that when the assault intensified behind closed doors, she screamed for help, but no one responded.

“He further choked me and pushed me against a cupboard, and while I was running out of breath, I spotted a knife in a drawer which I quickly grabbed, hoping to scare him so that he could stop the assault.

“When he saw the knife, he took two steps backwards and I pointed the knife at him, telling him that I was going to stab him if he continued assaulting me,” she said.

“That did not stop him as the more I spoke, it was like I was inviting more assault.

“He then advanced towards me, strangled me, bumped my head on the wall and during such commotion, I accidentally stabbed him in self defence,” Nangu said.