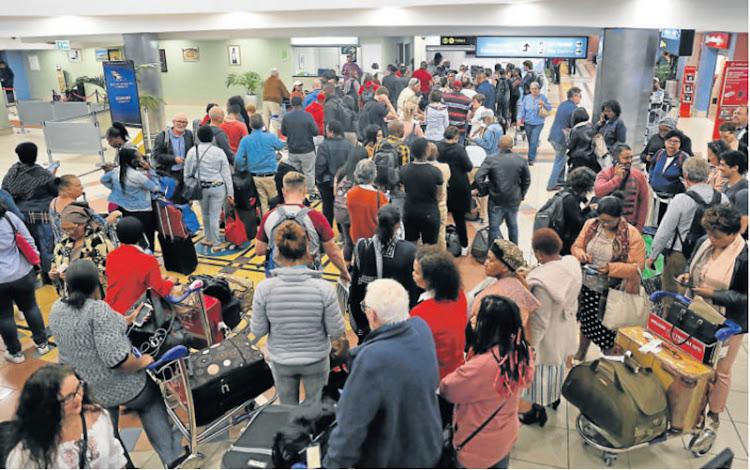 GOING NOWHERE: Several travellers were stuck at the East London Airport on Monday after flights were delayed and some cancelled after lightning struck a crucial electronic navigation system.
Image: SIBONGILE NGALWA

Despite the welcome rain in the Eastern Cape over the past few days, the province is not out of the woods yet in terms of the drought that has weighed heavily on farmers.

But the heavy downpours did not come without consequences. On Monday, several flights had to be diverted from East London Airport to Port Elizabeth International Airport, leading to great frustration among waiting passengers.

Crowds of people were milling about the airport terminal wanting to know what was happening.

The instrument landing system (ILS) operated by Air Traffic and Navigation Services (ATNS) had failed after being struck by lightning.

“ATNS is currently working on the ILS and expects it to be operational by this evening, but with the current bad weather being experienced in East London, it is not possible for aircraft to land at the airport without ILS,” said Airports Company of South Africa spokesperson Senzeni Ndebele on Monday afternoon.

However, by Monday evening Ndebele said the system was temporarily repaired and that some flights were able to leave the East London Airport, including an SAA flight that left for Johannesburg at around 5.25pm.

“Yes I can confirm that an SAA flight managed to leave East London, but we are not sure whether others will be able to land there later in the evening. The damaged system is not 100% fixed, but some planes can now land or take off from that airport,” said Ndebele.

Last week, proceedings had to be halted at the Zwelitsha magistrate’s court on Thursday afternoon when a thunderstorm prevented cases from being recorded.

Rural roads and bridges in parts of the province also suffered damage during the rainy period.

Although farmers are thankful for the rain, it was less than what they had been hoping for.

Agri Eastern Cape president Douglas Stern said: “We are very far from coming out of the woods. Honestly, we still need a lot of follow-up rain.

“This province is extremely dry. The drought we are facing has been the worst in 100 years, with this year being the fifth consecutive low rainfall year. If we have decent rain, an average of about 30mm across the province, that would be a good starting point, but the soft rain we have had is not enough.”

Weather SA spokesperson Garth Sampson said more rain could be expected in the province this week.

Some parts of the province had received well over 100mm of rain in the past four days, but he added: “We need rain for the next couple of days if we are to see a meaningful impact on our dry dams”.

East London experienced the heaviest rainfall on Saturday and Sunday, with 34.2mm and 33.2mm recorded respectively.

Between Friday and Monday, an average of 19.9mm rainfall was recorded around East London, 8.8mm in the Bhisho/King William’s Town area and an average of 8mm rainfall in the drought stricken Makhanda region.

Department of transport spokesperson Unathi Binqose said the department had noted, and was attending to the damage caused on some rural roads and bridges.

Binqose said MEC Weziwe Tikana, after concerns were raised on social media, had dispatched a team of technicians and engineers to all the affected areas, to assess and quantify the damage.

“Our response has been to promptly dispatch our teams to go and assess the damage, so we can work out a quick response plan to reconnect the affected communities.”

Before the rains, Eastern Cape dam levels stood at 60.1% capacity.

An update was not available by the time of writing on Monday night.