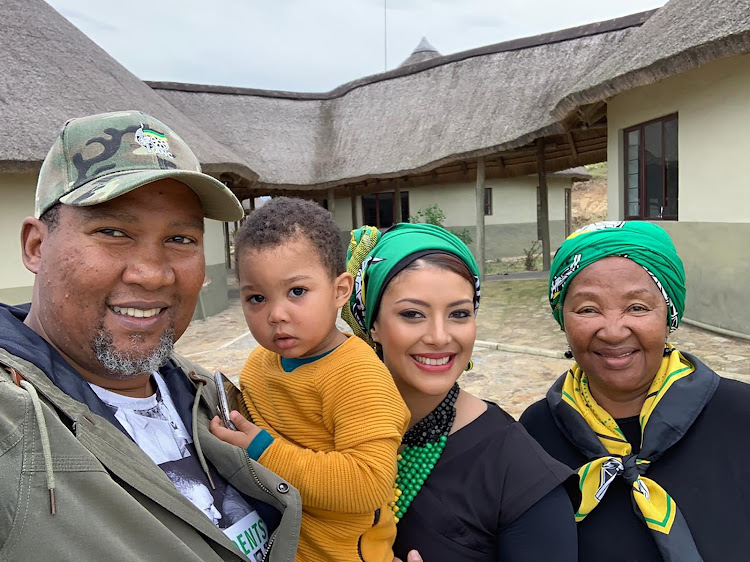 Mandela's grandson Nkosi Mandla Mandela, wife Nkosikazi Nosekeni Rabia Mandela and their the son Mandela Mandela, who will turn two on Saturday, and Mandla's mother Nkosikazi Nolusapho Mandela pose for a picture after voting for the ANC.
Image: Supplied

Mayibuye, 26, told TimesLIVE, that he would vote for the Black First Land First organisation in the Western Cape and only vote ANC nationally.

Mayibuye, who used to live with Mandla in Mvezo when he was doing matric at Nelson Mandela School of Technology, said he had left the Eastern Cape after he was not happy with what he called the ‘“political incarceration” of Azenathi’s father, King Buyelekhaya Zwelibanzi Dalindyebo. That was also the reason he snubbed the ANC in Western Cape, where he now lives.

Dalindyebo, who is serving a 12-year-sentence, is hoping for a presidential pardon.

Mayibuye said the acting king should have mobilised AbaThembu not to vote if the king was not released.

“Azenathi should have said ‘if the king is not released before elections, the whole region of AbaThembu should not vote’. He has the right to tell them ‘we don't go to voting stations in Mthatha, in Thembuland in particular’, but he did not say that,” said Mayibuye.

He would have voted in the Eastern Cape if the king had been pardoned.

Mandla lashed out at Mayibuye and apologised to Prince Azenathi.

“He must go study, finish his matric, then go to university. We need more educated young people to lead in our family. But the question we ought to be asking is who is Mayibuye to even be addressing the acting king? We always respect our traditional protocol, thus it is important to ask the question if he had ever raised this within the royal house of Mandela.

“Thus we render our apology to the Dalindyebo royal family for such silly, childish behaviour from kids trying to gain recognition,” said Mandla.

They appreciated the stance taken by Mandla.

Mandla is a senior traditional leader of AbaThembu and close relative of Dalindyebo.

Three Eastern Cape kings who had earlier called upon people not to vote for the ANC if Dalindyebo were not released before the elections, backtracked on Monday.

They urged people to vote for any political party of their choice including the ANC. On Wednesday the kings led their people to voting stations.

Mandla, who has been representing the ANC in PArliament, released a picture of his family in ANC regalia after voting in Mvezo. I

Since Mandla was made the head of the Mandela chiefdom in Mvezo, there has been some development.

But the area still has no access to clean water.

“When the privileged in urban areas such as Cape Town faced a water shortage crisis they coined the term day zero. They forget that such water shortages are the plight of many ordinary South Africans living in rural areas,” said Mandla.

Last year a R10m water scheme was launched ahead of the Nelson Mandela centenary celebrations.