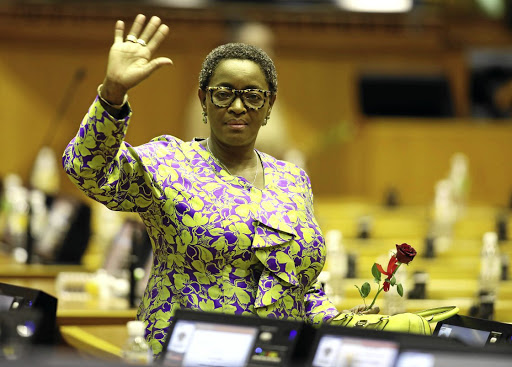 In her resignation letter from the National Assembly yesterday, Dlamini alleged that Dangor was one of the people who told her not to cancel the CPS contract which the Constitutional Court found was unlawful.

She made a claim in a resignation letter that she wrote to Luthuli House a day after the resignations of several ex-ministers including Jeff Radebe and Siyabonga Cwele.

Other former ministers who have resigned as MPs are Tokozile Xasa, Dipuo Letsatsi-Duba, Susan Shabangu, Nomaindia Mfeketo and Derek Hanekom. The ANC heavyweights left parliament after being excluded in President Cyril Ramaphosa's cabinet

CPS was tasked with the payments of social grants for 17-million people on behalf of South African Social Security Agency (Sassa).

The court found that Dlamini, as minister of social development, failed to ensure that Sassa would be able to continue paying social grants when its contract with CPS expired.

'I was made a scapegoat,' says Dlamini in scathing resignation letter

ANC Women’s League president Bathabile Dlamini said she was made a scapegoat and an easy target as she resigned as a member of parliament on Tuesday.
Politics
2 years ago

In order to make sure that millions of South Africans do not go to bed hungry, the court was forced to extend the unlawful contract as Sassa had no other means of paying the grants.

In her resignation letter, Dlamini wrote that Dangor was among those who were against the cancellation of the contract despite a directive from then president Jacob Zuma.

"He [Zuma] sent one of his advisors to tell me to cancel the CPS tender and DG Vusi Madonsela, Zane Dangor and Virginia Peterson recommended that this should not be done," she wrote.

However, Dangor said he was perplexed by Dlamini's remarks.

"I don't know where she gets that from. I did not tell her that at any stage nor did Vusi Madonsela, to the best of my recollection.

"... it [letter] seeks to cover issues that were dealt with and ventilated at the Ngoepe inquiry and pronounced on by the Constitutional Court."

Former tourism minister Derek Hanekom may have resigned from parliament, but will soon take up a position in the state.
Politics
2 years ago

Dangor resigned as director-general of the department after his fallout with Dlamini over the Sassa debacle.

Dlamini said the perception was being created that she had relationship with CPS when she had different people telling her what to do.

"What is also important to me here, is that I never arrived with CPS to the department. I found them there, already doing the work with the department."

She went on to allege that she was being made a scapegoat.

"Those that made profit through CPS and through their wives are known, but because they are well-respected by the organisation, nothing has been said to them."