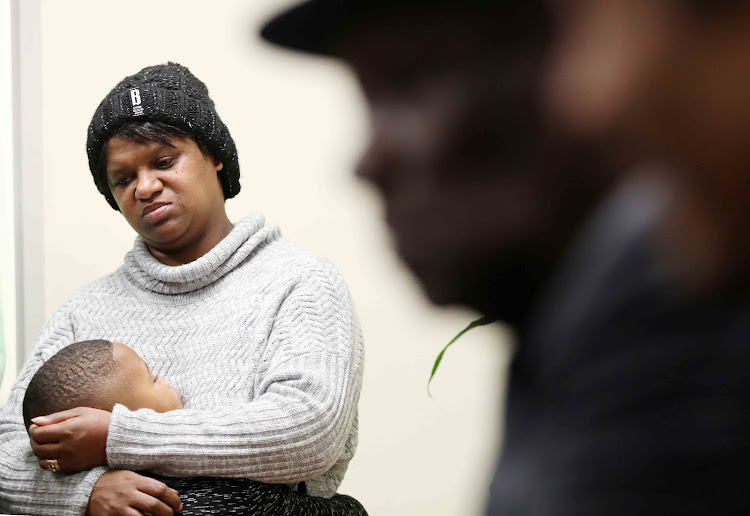 Sharlene Florence, the wife of Freddie Florence - one of the cops shot on Wednesday in Samora Machel - consoles her six-year old son Glayson outside the ICU at Melomed Gatesville hospital.
Image: ESA ALEXANDER/SUNDAY TIMES

Police arrested a 26-year-old man in Paarl on Wednesday morning in connection with the attack on six members of the police’s anti-gang unit in Cape Town.

The arrests happened while police minister Bheki Cele addressed media in the waiting room next to the intensive care ward at the Melomed Gatesville Private Hospital in Athlone.

Next door, two critically wounded members were clinging onto life after they and four other colleagues came under fire early on Wednesday while tracing suspects in the Sweet Home Farm informal settlement, near Samora Machel in Nyanga.

The officers had just arrested a suspect wanted for recent murder in the area when they came under fire from one of the nearby shacks, leaving all six members wounded.

The Western Cape education department says gangsterism and an “under-resourced” police force are at the heart a spate of violence in schools across ...
News
2 years ago

Cele announced that the police were placing the entire Samora Machel area under lockdown for 72 hours following the shooting.

Cele said “life will be difficult for the people of Samora” when 200 police officers comb the area by going door to door in a grid pattern until they find the suspects.

“We are going to up the game. We have one gun now that we believe was used in this thing,” said Cele.

The unit was launched eight months ago in an attempt to curb gang violence in the province. Despite numerous arrests, however, gang violence has not ceased.

Over the weekend, at least 14 people were killed in gang-related violence in Delft. In other hotspots, such as Hanover Park, daily shootings take place.

The City of Cape Town’s ShotSpotter gunfire detection system registered an average of 400 gunshots per month in Hanover Park during the first three months of this year.

However, the system did show a significant drop in figures from month to month - especially in Manenberg, which only registered 247 gunshots over the same time period and is now considered “stable”.

According to Western Cape premier Alan Winde, there have been 2,206 murders in the province since the anti-gang Unit came into existence in November.

Cele blamed the spatial design of Cape Town’s neighbourhoods for the policing failures, as he did when he announced the launch of the anti-gang unit following the murder of Gift of the Givers volunteer Ameerodien Noordien in Hanover Park last year.

Winde, however, claimed that there are 4,500 police vacancies in the Western Cape and blamed chronic short-staffing and under-resourcing for the violence.

The suspect in a suspected gang shooting that left an alleged Sexy Boys leader and his 20-year-old son dead on Tuesday, has died in police custody.
News
2 years ago

Eight die in PE gang violence in May

Eight people have been killed, some of them teenagers, and more than 10 injured in what appears to be a series of gang related killings in Port ...
News
2 years ago

Steven Swartz voted for Cyril Ramaphosa in Hanover Park, a decision he believes will be good for SA, but he says political parties won’t fix his ...
Politics
2 years ago

The Western Cape government has declared a formal dispute with police minister Bheki Cele over a shortage of police in the province which it says he ...
News
2 years ago