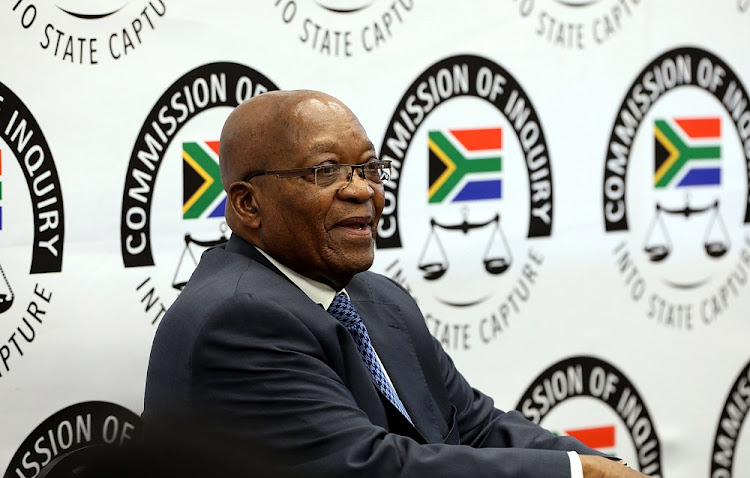 Former president Jacob Zuma prepares to continue to give his testimony at the hearings of the judicial Commission of Inquiry in Allegations of State Capture, Corruption and Fraud in the Public Sector including Organs of State.
Image: SANDILE NDLOVU

Former president Jacob Zuma has sought to distance himself from the redeployment of Themba Maseko from GCIS to the department of public administration in 2011.

Maseko earlier this year told the state capture commission that the late minister in the presidency Collins Chabane said that he was directed by Zuma to remove Maseko from the government communications portfolio.

According to Maseko, this came after the Gupta brother, Ajay to be specific, was unhappy with the fact that he did not cooperate with him.

When Maseko did not agree to the meeting, he testified that Ajay then told him he would get his seniors - who Zuma admits is either the minister, who was Chabane, and himself - to deal with him.

Former president Jacob Zuma appeared at the Zondo commission of inquiry into state capture in Johannesburg on July 16 2019. Zuma stated that following his first day of testimony at the commission, he received death threats towards him and his family.

It was soon after this conversation that according to Maseko he was removed and replaced with Mzwanele Manyi.

Maseko said when he met Chabane, he was told Zuma had instructed Chabane to terminate Maseko's  contract. According to Maseko, Chabane said he had received a call from Zuma, who was out of the country at the time, instructing him to remove Maseko.

Zuma said people often used his name if they wanted "bad" things to be done and  Chabane could have done the same if he wanted to get rid of Maseko.

Zuma also acceded that if Ajay spoke to Maseko in that manner and promised to get his seniors to deal with him, then he could say he abused his relationship with either him or the minister.

In further distancing himself, Zuma said that although he was often briefed about the progress of The New Age newspaper, how it would be financed never formed part of their discussions.

“From time to time they briefed me. They [were] just briefing me on the progress they were making, not the financing,” Zuma said.

Former president Jacob Zuma continues his testimony at the Zondo commission of inquiry into state capture on July 16 2019. NOTE: Session starts at 14:00 CAT.