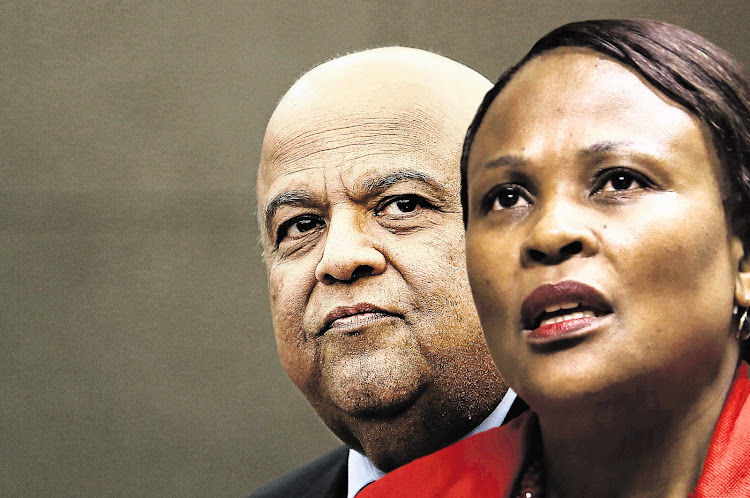 The battle between Busisiwe Mkhwebane and public enterprises minister Pravin Gordhan over the public protector’s report into the so-called SA Revenue Service (Sars) rogue unit will head to court on Tuesday.

The high court will hear the urgent application to interdict the implementation of Mkhwebane’s remedial action, BusinessLIVE reported.

Mkhwebane found that Gordhan had violated the constitution and the executive ethics code, and directed President Cyril Ramaphosa to take appropriate disciplinary action against him. She has also directed, among other things, that the police commissioner investigate, within 60 days, the conduct of Gordhan, former Sars deputy commissioner Ivan Pillay and other officials involved in the Sars unit for violating the constitution and the National Strategic Intelligence Act.

The rogue unit narrative was used as an excuse to purge senior Sars executives, as well as disband the tax agency’s executive committee when Tom Moyane took over as commissioner at the end of 2014. It was also the context in which Moyane justified his far-reaching overhaul of the Sars operating model by consultants Bain & Company, which neutralised its effectiveness and brought it to its knees.

The SACP says it will lobby for the National Assembly to begin a process to review public protector Busisiwe Mkhwebane’s fitness to hold office.
Politics
2 years ago

Earlier this month, Mkhwebane found that the establishment of the unit was unlawful and that Gordhan, who was Sars commissioner at the time, had violated the constitution.

She also found that the unit had conducted irregular and unlawful intelligence operations and that Sars had failed to follow procurement rules when it bought spying equipment.

This was despite previous reports on the establishment of the unit either being discredited or debunked.

Gordhan has lodged a two-part application. In part A, which is the urgent interdict application, the minister wants the court to suspended the remedial orders in Mkhwebane’s report until the review of the report has been concluded.

It also seeks to interdict the office of the public protector from enforcing the remedial orders once the review process is finished.

Public enterprises minister Pravin Gordhan had to be whisked away from the podium as EFF MPs charged towards him in attempt to prevent him from ...
News
2 years ago

Mkhwebane has said that she will defend her report in court.

The court will hear the application a day after the Constitutional Court agreed with the high court that she acted in bad faith in her investigation into the Reserve Bank’s apartheid-era Bankorp bailout, and will have to pay the costs of the matter out of her own pocket.

Mkhwebane, who will now have to pay close to R1m in the matter, is also now waiting for the high court to make a decision on the costs order in the Estina dairy farm matter, where her report was reviewed and set aside. The court had postponed making a judgment on costs pending the outcome of the Constitutional Court matter.

Public protector Busisiwe Mkhwebane says she is disappointed at the 'personal insults' by public enterprises minister Pravin Gordhan in court ...
News
2 years ago

Gordhan has also asked the high court, in his review of the Sars report, to order that Mkhwebane personally pay the costs and on a punitive scale.

“The taxpayers of South Africa should not have to continue to fund her unlawful conduct,” the minister said in his affidavit to the court.

“Once again, she has demonstrated that she is unfit to hold the office of the public protector. She continues to ignore her constitutional mandate, act without regard to the provisions of the law and seemingly in service to some other motive or agenda,” he said.

This is the first of the two review applications Gordhan has lodged against Mkhwebane’s reports.

Later this month the court is expected to hear the application to review the public protector’s report into the early pension payout made to Pillay.

In this report, Mkhwebane had also made adverse findings against Gordhan, finding that he violated the constitution.