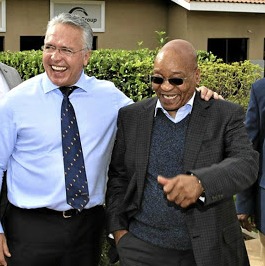 Gavin Watson with then president Jacob Zuma on a visit to Bosasa's Krugersdorp headquarters in 2015. Watson died in a car accident on Monday.
Image: via Twitter

The ANC has heaped praise on Bosasa CEO Gavin Watson, describing him as an anti-apartheid activist and philanthropist who fought in the Struggle for liberation.

In a statement mourning Watson's death, the party said that he, together with his brothers Ronnie, Cheeky and Valence, associated themselves with the Struggle for liberation at an early age — and “fought side by side with many compatriots against apartheid”.

Watson died in a car crash early on Monday morning near OR Tambo International Airport.

“It was in his home province of the Eastern Cape, where [Watson] made the admirable and brave choice of dissociating himself with the privilege that came with being a white male in apartheid South Africa and choosing to participate actively in pursuing the ideals of a free, democratic and non-racial South Africa,” the ANC said.

“The Watson brothers were well known activists in the United Democratic Front (UDF) and within the African National Congress underground structures at the time. To a large extent, their role in the fight for nonracial sports, especially rugby, resulted in one of the most symbolic acts of opposition and discontent against discrimination in sport.”

The party said Watson also played a significant role in providing support, through the family businesses, to many activists and operatives of uMkhonto weSizwe.

“In the democratic era, Cde Gavin continued his activism and was unwavering in his support for the ANC,” it said.

“His charity work in support for youth and communities in distress in the West Rand was admirable and his death has surely robbed those communities of a philanthropist who gave hope and inspired many young people within those communities through skills training and development.”

Bosasa CEO Gavin Watson was confirmed dead on the scene of a fatal car accident near O.R Tambo airport on August 26 2019. Watson, who has been implicated in the Zondo Commission of Inquiry into State Capture, allegedly lost control of his vehicle and crashed into a concrete pillar. A case of culpable homicide has been opened.