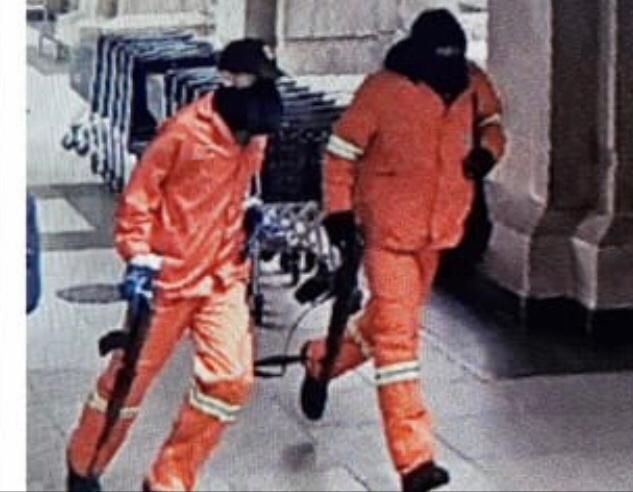 Robbers dressed in Durban Solid Waste uniforms leave the Pavilion in Westville after raiding a jewellery store there on Thursday.
Image: Supplied

The eThekwini municipality will investigate how a gang of robbers got their hands on Durban Solid Waste overalls, which formed part of their disguise during a jewellery store robbery on Thursday.

The men raided the store at the Pavilion shopping centre in Westville before making off with a trolley laden with loot.

Municipality spokesperson Msawakhe Mayisela told TimesLIVE that the city condemned "with the contempt it deserves" the use of a uniform bearing the logo of one its units during a robbery.

"We are going to conduct an internal investigation to ascertain whether there was any negligence on the part of some of our employees," said Mayisela.

A woman who was allegedly involved in a business robbery with 15 others at Jet Park in Boksburg, on the East Rand, has been arrested
News
2 years ago

WATCH | Cash-in-transit robber, who was an international MMA fighter, dies after botched heist

A cash-in-transit robber who was killed alongside one of his accomplices during an attempted heist in KwaMashu, north of Durban, on Monday has been ...
News
2 years ago

A reward is being offered to help find four "persons of interest" who might be able to assist in an investigation into a robbery at a high-end ...
News
2 years ago

'Rolex gang' members were out on bail, parole when bust in Sandton

MMC for public safety Michael Sun said two were out on parole for serious crimes and a third man was previously sentenced 20 years behind bars for ...
News
2 years ago