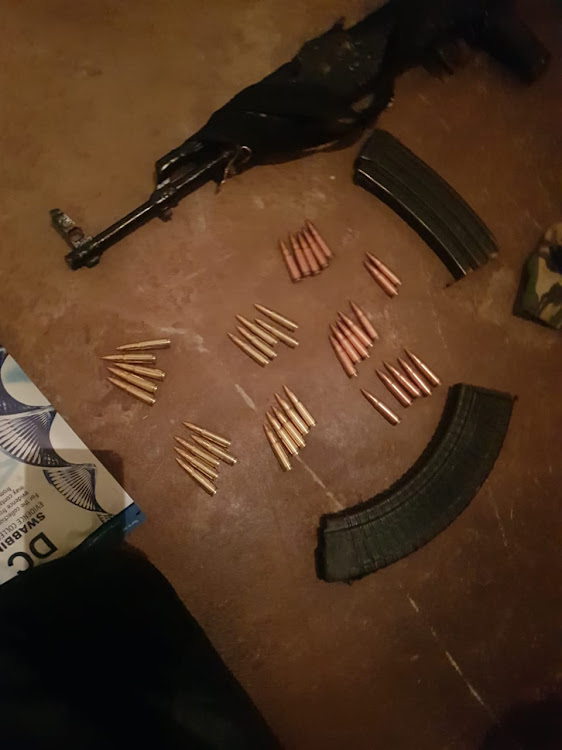 Police on Friday arrested seven men accused of being behind a cash-in-transit heist south of Johannesburg on Thursday.
Image: Supplied

According to police, the gang hit a cash van at Kliprivier, south of Johannesburg, on Thursday at about 5pm, using explosives to blow up the vehicle. They fled the scene with an undisclosed amount of money.

But it wasn't long before the gang was apprehended.

"Seven suspects aged between 35 and 54 were arrested in GaMmakau, Akasia, Ennerdale, Palm Ridge and Katlehong within a day after the alleged CIT robbery. During the arrest, two rifles with ammunition, a signal jammer and a luxury SUV were recovered. The SUV was reported stolen in Akasia in last month," police spokesperson Col Brenda Muridili said in a statement.

Twelve armed men were intercepted on Wednesday en route allegedly to carry out a  cash-in-transit heist in Soweto.
News
2 years ago

"I am pleased that members continue to arrest perpetrators of these heinous crimes, therefore alleviating the fear that these crimes seek to instil in our communities as we continue to stamp the authority of the state," he said.

The Hawks have taken over the case.

WATCH | Cash-in-transit robber, who was an international MMA fighter, dies after botched heist

A cash-in-transit robber who was killed alongside one of his accomplices during an attempted heist in KwaMashu, north of Durban, on Monday has been ...
News
2 years ago

Community members seemingly helped themselves to the loot after an armed gang carried out a brazen cash-in-transit heist in Vlaklaagte, Mpumalanga on ...
News
2 years ago

A dramatic shootout between a G4S armed guard and three thugs was caught on CCTV camera outside the Caltex garage on Willowvale Main Road on Friday ...
News
2 years ago