Two Northern Cape primary schools where 95% of the staff members are white have lost a court bid to fill vacancies with more white teachers.

Kathu Primary, in the province’s “iron ore capital”, and Seodin Primary, in Kuruman, went to the high court in Kimberley when the provincial head of education refused to rubber stamp the appointments of three white men. 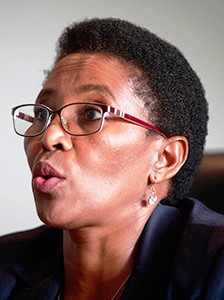 But judge Bulelwa Pakati said head of education Tshepo Pharasi acted “reasonably and rationally” in vetoing the appointments, which were recommended by the school governing bodies.

Pharasi told Seodin Primary, where half the 845 pupils are white, 40% are black and 10% coloured: “Your educator component is almost entirely white [and] ... your school management team is entirely white.

“It is required of the school governing body to adhere to the principles of redress, equity and representivity. The recommendation of the school does not suggest that this has been the case.”

“The governing body has not demonstrated a concerted effort to address equity,” he said.

Kathu wanted to appoint Carl du Plessis as a head of department, and the governors submitted the names of two other white men, John Wilson and Jasper Venter, as their second and third choices.

Pharasi told the court that the chairman of the governing body’s selection committee, grade 7 parent Louis Steyn, was one of the referees listed by Du Plessis.

A Durban teacher has been placed on suspension after allegedly telling pupils that white people are generally smarter than people of colour.
News
2 years ago

Seodin wanted to appoint MA van Zyl and Zacharias Möller as department heads, and headmaster Adriaan Laubscher, an interviewing committee member, was a referee for Möller and another candidate, Phillip van Schalkwyk, who emerged as the third choice for both posts.

In her judgment last week, Pakati said: “Steyn and Laubscher clearly had a personal interest in the career advancement of Du Plessis, Van Schalkwyk and Möller,” but they failed to recuse themselves.

“The impression that as the candidates’ references they felt strongly that these candidates should succeed, even before the commencement of the shortlisting and interview process, would not be unfounded.”

“We can’t find good black teachers.” I have heard that lament so often among middle-class schools – White, Indian and Coloured – that the patronising ...
News
2 years ago

A shortlisted black teacher from Aliwal North, 650km from Kathu, withdrew from the interviews after being given only two days’ notice. Two education department officials told the judge he would have scored the highest because of his equity status.

“The two officials also found that some candidates were underscored, which made the process unfair,” said Pakati.