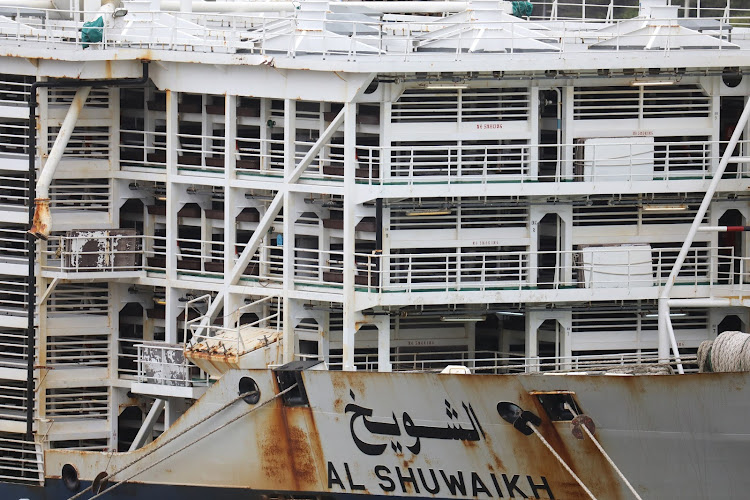 The NSPCA said it also boarded the Kuwaiti-registered Al Shuwaikh on Sunday to conduct an independent inspection following a request by the national agriculture department.
Image: Alan Eason

An unknown number of the 60,000 sheep in a feedlot about to be loaded onto a livestock ship were found to be limping, and with eye infections, according to a statement posted by the National Council of SPCA on their Facebook Page on Monday.

The NSPCA said that with the assistance of the SAPS on Monday, their inspectors had visited the Berlin feedlot, where the SPCA had to euthanase one sheep which was found with a fractured leg.

The NSPCA said they were considering laying charges against livestock company Al Mawashi in terms of the Animal Protection Act No 71 of 1962 and that it was the responsibility of the government to prevent this cruelty from occurring by upholding the country’s law.

A video showing a sheep with a wounded back leg limping on a dirt road in a feedlot was attached to the NSPCA’s Facebook post.

The organisation said it also boarded the Kuwaiti-registered Al Shuwaikh on Sunday to conduct an independent inspection following a request by the national agriculture department.

The NSPCA said what they found was cause for concern.

A spokesperson for the department of rural development & agrarian reform, Ayongezwa Lungisa, said details of their inspection and decision would be revealed on Wednesday. 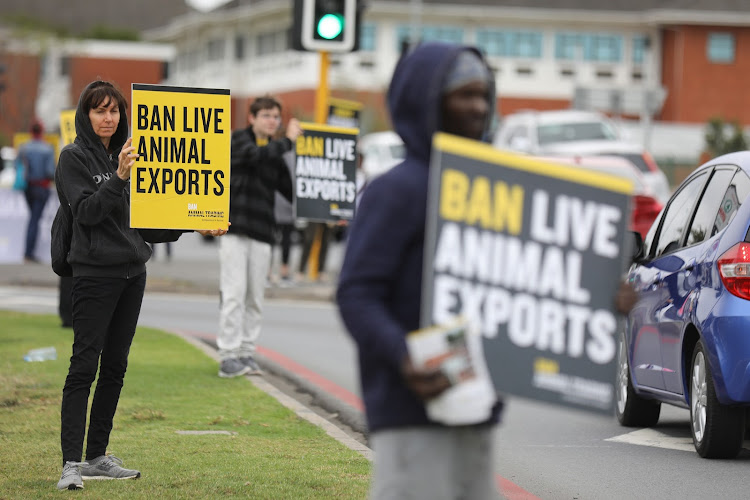 “I’m against any form of animal cruelty and that’s why I’m here today.”

The protest, which took place at the intersection of Bonza Bay Road and Quenera Drive from 10.30am, saw motorists hooting in support all morning. Protesters spoke of their determination to put an end to the “cruel” and “inhumane” trade of live animals.

“The public were very supportive and we hope we have created awareness about the animals’ suffering on these ships,” she said.

“We hope to see the industry end before it begins.”

Protester Luzuko Fetu said: “We must take care of the animals on earth, and I don’t like what I’ve seen about these live exports. I’m here for them, for the animals.”

Phelisa Silimela and Rani Little, who both assist with an anti-animal cruelty outreach project in Nompumelelo township nearby, said they believed there was a blatant disregard for the animals aboard these ships.

Little said: “They are pretending it’s about job creation, but it’s just all about money.

“They don’t care about these animals’ suffering.

“If people are going to eat the animals anyway, why must they go through so much suffering just to be slaughtered on the other side?”

The Daily Dispatch drove past the EL port and could see big sacks of animal feed placed near the Al Shuwaikh, which was still docked at 2pm on Tuesday.

There were no signs of anything being loaded onto the ship.

Mabandla said: “This is the best of all of the vessels that have come to East London. It comes with a permanent vet.”