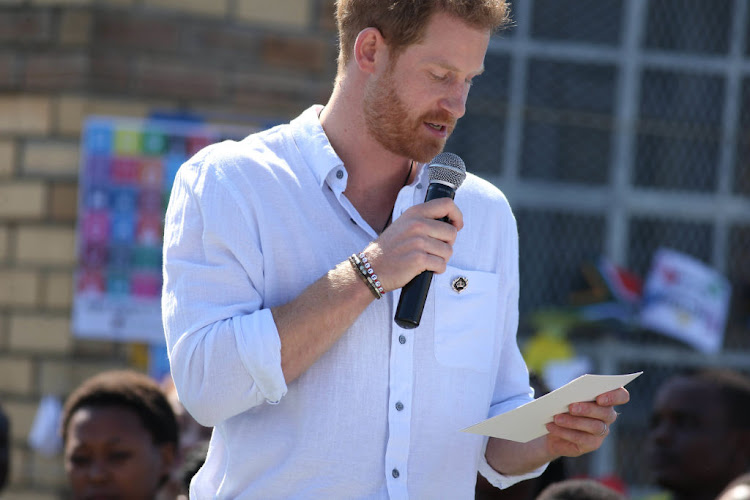 Britain's Prince Harry paid an emotional tribute on Wednesday to Africa and its people on the last day of his 10-day tour, calling the continent his "second home" and pledging to do all he could to help what he called the changemakers.

In a speech to young entrepreneurs in Johannesburg, his wife Meghan by his side, Harry said he drew inspiration from Africans' generosity and resilience.

"You are the changemakers, you are helping to grow your country's prosperity by lifting those around you and offering a better future," he said, to cheers.

He made no reference to a lawsuit the couple has filed against a British tabloid newspaper that cast a shadow over the end of their trip.

But striking a personal note, he said visiting Africa from boyhood had helped him come to terms with the death of his mother Princess Diana, who died in a car crash in Paris in 1997 at the age of 36.

"Ever since I came to this continent as a young boy, trying to cope with something I can never possibly describe, Africa has held me in an embrace that I will never forget, and I feel incredibly fortunate for that," he said.

"I always feel - wherever I am on this continent - that the community around me provides a life that is enriching, and is rooted in the simplest things - connection, connections with others and the natural environment.

"And as I raise my own son, I want to make sure that what I've learned here - the value of the natural world, the value of community and friendship - is something that I can pass on to him," said Harry, a grandson of Queen Elizabeth and sixth in line to the British throne.

The Duke and Duchess of Sussex and their four-month-old son Archie arrived in South Africa on Sept. 23 on their first overseas tour as a family. Harry then visited Botswana, Angola and Malawi on his own, while his family stayed in South Africa.

Harry's speech came a day after the couple said they had begun legal proceedings against the Mail on Sunday newspaper over the publication of a private letter.

Harry accused sections of the British press of "bullying" and compared the treatment he said his wife was having to endure to that of Diana, one of the most photographed women on the planet.

"My deepest fear is history repeating itself. I've seen what happens when someone I love is commoditised to the point that they are no longer treated or seen as a real person. I lost my mother and now I watch my wife falling victim to the same powerful forces," he said in a statement.

The newspaper said it stood by its story.

On Wednesday, the couple visited a youth employment hub in the Tembisa township outside Johannesburg. They also met young women working at a facility producing compostable, affordable sanitary towels.

Unemployment in South Africa hit an 11-year high earlier this year, and the project tries to equip young people with a range of skills and entrepreneurial opportunities.

A beaming Meghan said: "There’s so much ingenuity here, there’s so much promise here, that given the right level of support and resources that you need, the potential is astronomical."

"I have often talked about Africa as my second home, and I’ve often been asked why I love it so much. Well, over these last nine days I have been trying to put my feelings and experiences into words, which is not easy, he said.

"Last night I returned from my third visit to the fourth poorest country in the world - Malawi. Despite extreme hardship and ongoing challenges on so many levels, people are generous, they are strong, humble and incredibly optimistic."

Later on Wednesday, the couple will meet Graca Machel, widow of late president Nelson Mandela. They will also meet South Africa's President Cyril Ramaphosa and his wife, Tshepo Motsepe, before flying back to London on Wednesday evening.