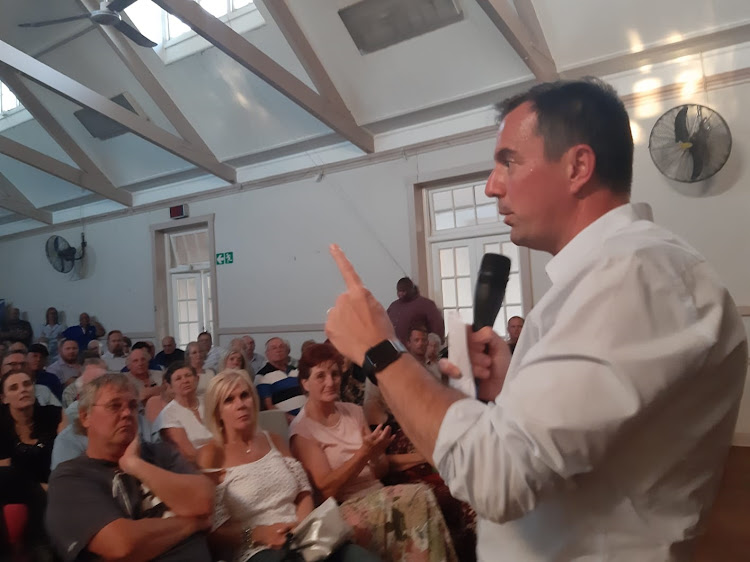 The only way to root out corruption and maladministration in the city is to start preparing now for the next local government elections, DA interim leader John Steenhuisen said.

Steenhuisen was speaking at the second leg of the DA’s Save Nelson Mandela Bay campaign at the Walmer Town Hall in Port Elizabeth on Tuesday night.

“To make sure the DA has a better majority, don’t be beholden to these smaller parties that try to get votes away for purpose of office and things that they would like to have and betray the people that voted for them,” he said.

“We can do it. This city is worth fighting for. It was amazing to drive around today and see the huge potential this city has.”

Steenhuisen said he hoped residents of the metro would turn their backs on the current political administration when the party knocked at their doors for the 2021 municipal elections because the ANC, UDM, PA, AIC and UF coalition did not care for the people.

“They must feel the wrath of the people of Nelson Mandela Bay because they threw the city and its residents to the wolves and those wolves are biting deep into good council governance, biting deep into the flesh of the coffers of this city and will leave bones.

“It’s our job to get rid of these wolves, which is why we have set up a task team in parliament headed by [DA Eastern Cape chair and MP] Andrew Whitfield and we’re bringing MPs from different portfolios.

“It will use parliament’s motions and member statements to raise the plight of the people of Nelson Mandela Bay and call on the government to intervene and remove this government,” Steenhuisen said.