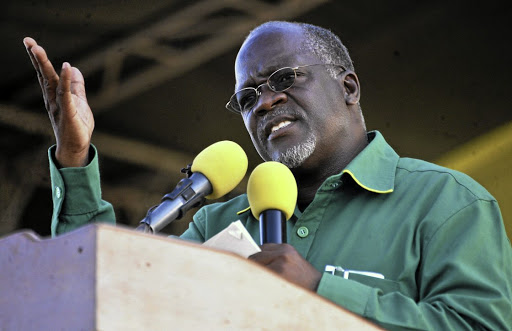 Nairobi — Gay Tanzanian activist Tee, 34, recalls with nostalgia a time when Tanzania was like “paradise” for LGBTI people — before the 2015 election of President John Magufuli ushered in fear and persecution.

It’s all relative. Tanzania has long criminalised same-sex relations, and social stigma has always existed, but under previous governments homosexuality was not a public discussion.

The country was slowly making progress by including the LGBTI community in discussions on healthcare and the fight against HIV/Aids.

“In those days Tanzania was like paradise... We were enjoying our life, people were going out, hanging out in bars, having meetings, public events, without fearing anyone. We were able to participate in government meetings,” Tee told AFP during an interview in neighbouring Kenya, using a pseudonym out of fear for his safety.

“But now you can’t even dare. Now we have to hide ourselves.”

Human Rights Watch (HRW) on Monday released a report called “If We Don’t Get Services We Will Die”, detailing the anti-LGBTI crackdown under Magufuli’s rule.

“The Tanzanian authorities have orchestrated a systematic attack on the rights of LGBTI people, including their right to health,” said Neela Ghoshal, senior LGBTI rights researcher at HRW.

“Manufactured threats around the so-called ‘promotion of homosexuality’ have displaced best practices and evidence-based approaches in guiding HIV policy in Tanzania.”

This led a lawmaker to accuse the station of “glorifying gayism”, and it was forced to issue an apology.

In ensuing days the regional commissioner of Tanzania’s economic capital Dar es Salaam, Paul Makonda, pledged to arrest gays and anyone who followed them on social media.

Not long after, the health ministry banned the sale of lubricants outside of government hospitals.

They also shuttered scores of drop-in centres which had been established by nongovernmental organisations to provide HIV testing and counselling and distribute anti-retroviral therapy, condoms and lubricant — seen as safe spaces for the LGBTI community — for “promoting homosexuality”.

‘They end up dying’

Tee, like numerous LGBTI people interviewed by HRW, said he knew of many people who had stopped taking their HIV medication and died as a result.

He is also HIV positive and said that government hospitals “are stigmatising the people going to access services. There is a lot of preaching, a lot of negative words from those healthcare workers. They tell you how to live.”

A transgender women activist and sex worker, who identified herself as Queen M, 31, told AFP she had been ridiculed at public hospitals.

She said transgender women had also been increasingly targeted by police.

“There was a time I was coming from a club, in a short dress. I did not have money... They said if you don’t have money what else can you offer. I had to have sex with five of them (police officers) the same night,” she said.

Queen M said that she also knew many people who had stopped taking their medication.

“The funny thing is there are those who are still taking medication — but still their viral load is increasing, from stress, self-stigmatisation,” Queen M said. “At the end of the day, they end up dying.”

Magufuli has been credited with efforts to stamp out corruption, but he has come under fire for clamping down on civil liberties. That includes tightening the screws on the media, opposition and civil society organisations.

In 2018 he assured the World Bank — which had blocked missions to Tanzania over discrimination against LGBTI people — that the government would end “discriminatory actions related to harassment and/or arrests” on the basis of sexual orientation.

Denmark also reversed a decision to withhold $10m in aid from Tanzania on the basis of human rights violations.

On Friday, the US state department slapped a travel ban on Makonda, the outspoken anti-gay commissioner of Dar es Salaam, for “his involvement in gross violations of human rights”.

However, HRW says nothing has changed and urged donors to “hold President Magufuli accountable to his commitment”.