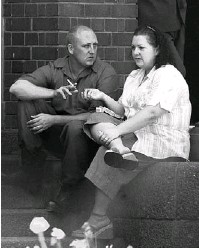 In 2004, Flippie Venter was on a peacekeeping mission in Burundi when he was arrested and charged with the rape and murder of a 14-year-old sex worker. He was released on bail and returned to South Africa into the waiting arms of his family. His wife, kept in the dark about the true evidence against him, continued to support him for 18 months while he awaited trial. In 2006, Flippie began to realise that, should he be found guilty, he would likely lose his wife and two small children. Unable to accept this possible outcome, Flippie armed himself with an R4 rifle and made the decision for them.

12 years later, Flippie Venter is about to be released back into society. In Episode 20, True Crime South Africa discusses this man’s horrendous crimes against his unsuspecting family and remembers the 14-year-old Burundian victim whose life Flippie felt it his right to take.

LISTEN TO THE STORY HERE:

In September this year, Alaskan woman Kathleen Jo Henry went missing.  Her remains would later be discovered dumped off a major highway that runs ...
News
1 year ago

This week True Crime South Africa dedicates its Spotlight minisode to the fight against gender-based violence.
News
1 year ago

In 1995 a serial killer prowled the streets of Pinetown, KwaZulu-Natal. He would take the lives of two teenage girls and leave two other young women ...
News
1 year ago
Next Article